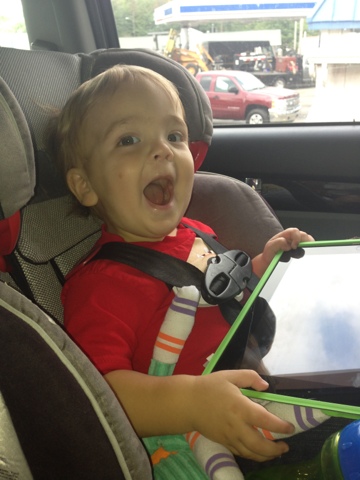 We headed to Cincinnati this afternoon for activation day! Our audiologist, Dr. Scott, was wonderful! A lot of those YouTube videos that circle around are of kids and adults who had some hearing and lost it for one reason or another. When they get activated, they are hearing sound again. Unfortunately, Brody had very little, if any, benefit from his hearing aids. He was not able to hear speech even with the hearing aids on. So what his reaction would be was a mystery to us. Some kids cry, some laugh, others do nothing. 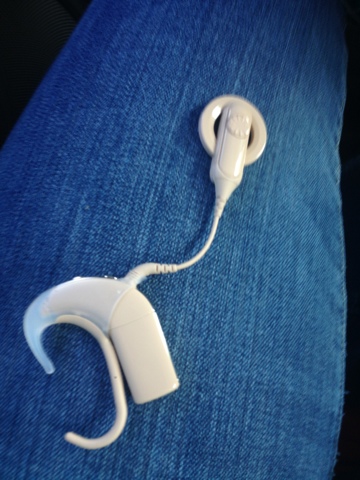 Here's a picture of his processor. I'll describe it in lay man's terms for everyone. Starting at the top, that is the circle, is the magnet. It sits on top of the skin and connects to the magnet inside his head (what they put in during the surgery). The little string is called the coil. This is the part that breaks the most with little ones. It's fun to chew on and swing around! :) The sound travels through the processor into the coil. 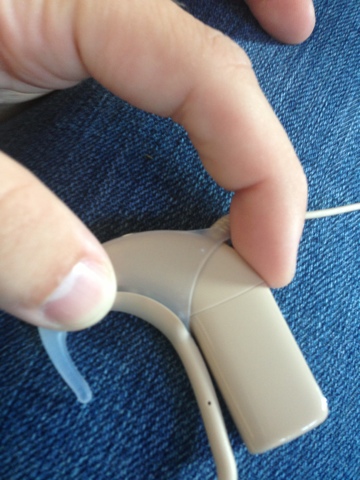 The part at the top is the processor. This is the "computer" part. It processes the sound. The bottom part is the battery. Right now he has the disposable battery compartment on. There is also a rechargeable battery option. They just aren't fully charged yet. 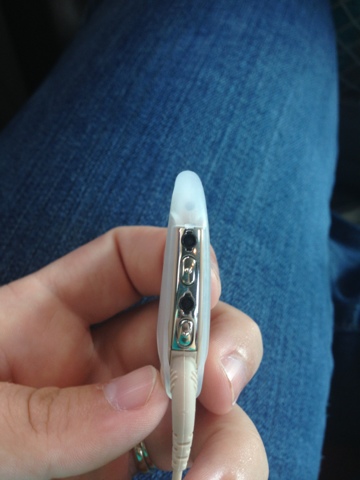 The two black dots are speakers. The sound comes into the processor and is sent through the coil to the internal piece that then signals the brain. The silver buttons turn the device on and off. You can also change the programs and volume. Right now, since he is young, he can only mess with the on/off and the programs. And really Jordan and I will be doing that, not Brody. 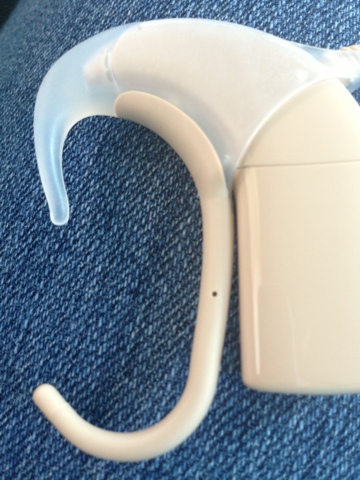 This is an ear snuggie that helps hold the processor on. Dr. Scott is a fan of these for younger kids. At school, I usually just like the processor and some toupee tape to hold it to the ear. It worked well with his hearing aids. We'll try this though!

Dr. Scott started off doing some measurements. During this process, he connected the processor to the computer by attaching a cord where the   battery goes. Then, he put the left one on Brody's ear. He did a series of beeps through the processor, so Brody could hear them, but we didn't. Brody's reaction was pretty funny. Every time he heard the beep, he would point to the light and sign light. Not the reaction a typical kid would have but Brody likes to be different! He did it continuously for every beep!

Then, Dr. Scott turned on the microphones for us to talk to Brody where he would have access to our speech. He didn't seem to notice. He left it on for about 5 minutes. Then, we switched to the right side. He again pointed to the light every time he heard the beeps. When Dr. Scott switched on the microphones, Brody started crying. This was the reaction I was most expecting. Every time he heard something he would start crying again. It was not hurting him in any way, just something new to get used to.

Then, we put both processors on. Brody cried a little bit then started doing "roll" over and over. Of course he was wanting to incorporate his favorite football team into the activation (Roll Tide)! It killed Papa Tom, but he gave in and signed it with Brody! (Papa Tom is a Notre Dame fan!)

He did pretty good with keeping them on, but did pull them off a number of times through the process. On the way home, he was exhausted and the processors were apparently not an option for him. 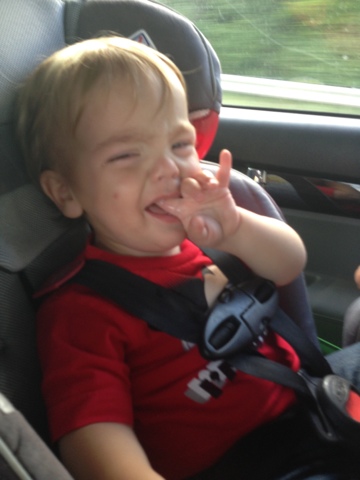 It's been a long day! We are excited to get started with the process though. Brody will start speech therapy and listening therapy soon. Listening therapy is done with a Listening and Spoken Language Specialist (formally known as an Auditory Verbal Therapist). There are a lot of similarities between a speech therapist and an LSLS, so much that the state of Kentucky recognizes them as one in the same. But they are not. We can't receive both services through First Steps, our early intervention program. So he is going to receive speech therapy through First Steps and LSLS privately. Can't wait! Hopefully, I will also learn a few things to better my classroom!

Ms. Pam updated the pilot caps for Brody. Pilot caps are sometimes worn to help assist in keeping the devices on. She made an Alabama football helmet and a Notee Dame football helmet! 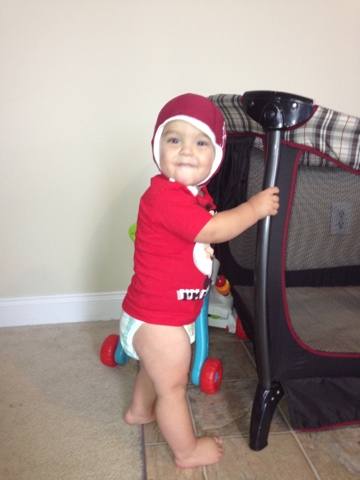 Jordan and I are so thankful for all of the support and prayers we have received. Brody is one super loved little man! This is just the beginning. We have many more years of this journey to continue!

Posted by The Fromholt Family at 12:56 PM