Brody has been making dramatic changes in the past few weeks. He is becoming more of a "terrible twos" child, but he is also making big changes developmentally. We are still seeing the Physical Therapist, Occupational Therapist, Teacher of the Deaf, Teacher of the Vision Impaired, Aqua Therapist, Speech Therapist, Listening and Spoken Language Specialist, as well as the audiologist who we haven't seen since I last posted.

In Physical Therapy, Ms. Pat has been backing off her therapy sessions some because Brody is doing what she wants him to do as well as progressing appropriately. He is walking around the house completely independently. He would probably be more independent when we are out and about too, but I am too afraid to let him go. He still falls a lot because of his balance issues and often face-plants. I know that kids fall a lot when learning to walk, but he has two major components for hearing in his head (the Cochlear Implants) and I don't want him to knock them out of place. Our surgeon did put tether lines to hold the magnet in place which a lot of surgeons don't do, but I can be a little over protective! Brody is also still wearing the braces that are like inserts for his shoes. They cover up right past his ankle. I think he is starting to walk better without them on, but we are going to keep wearing them until Ms. Pat says he can stop. Hopefully that is before the end of summer. He only has two pairs of shoes he can wear with the braces and those don't include cute summer ones!

In Occupational Therapy, we have a new OT (not sure if I had mentioned that before). Brody loves Ms. Debbie! She is awesome too! Brody has really good fine motor skills; we are more worried with his vestibular system and balance issues. She didn't think that we needed to go back to Cincinnati Children's for the vestibular evaluation we had talked about doing. She said she has seen a big change in his balance. He is starting to catch himself when he is falling. He is also correcting a lot of his core muscle issues!

Ms. Paula is still Brody's Teacher of the Deaf. She is only seeing him a few times this plan. Ironically, his hearing isn't the biggest "problem" anymore. He is listening and starting to follow directions. A big part of Ms. Paula's job is educating the parents (we got that part down) and staying on the parents about wearing the devices (Brody doesn't have a choice in the matter. They are on all waking hours!). He loves when she comes to play though. It is good to have her working with him to tell us what developmental step comes next. Brody will start going to the play group at Heuser Hearing & Language Academy (my school) in June. They start playgroup when they turn 2. Can y'all believe he's almost two?! Where has the time gone?! Ms. Paula brought over an Easter Egg that talks. There is a little bunny inside. You hide the egg and it calls out until you find it and open it. Brody loved it!

Ms. Mary is still on the plan as consult. Since Brody doesn't have any vision issues at this moment, there is nothing for her to really work on with him. She does however provide us with resources and opportunities to be involved with other families who have children with vision loss. We met with two women from the Kentucky Deaf Blind Project. They gave us information about the organization. I feel bad taking resources from other kids that need it since Brody doesn't anything right now. They cover kids until they turn 21. I know that we will need their services and grants in the future, but we aren't going to take money away from families that need it more than us. They offer a lot of technology grants and community involvement grants.

Brody has a standing appointment with Ms. Melody each week for Aqua Therapy. For as much as he hated it at first, he absolutely loves it now! The only thing that changed was getting the aqua bags to put his processors in so he can wear them while he is swimming. He can follow directions and interact with Ms. Melody now. He actually got excited yesterday when turning into the parking lot! Ms. Melody said yesterday that she thinks she is going to discharge Brody at the end of the summer if not before. Maybe I can talk her into letting him stay a little longer!

We do speech therapy with Ms. Kristie. We are working a lot on repetitive sound words (dada, mama, papa, baba). Brody said his first true word...MAMA! Sorry Jordan :) He is also saying Bye-Bye, go, a-a (Papa), Gr-mama (grandma), o-o (JoJo), Mmmm-r (more), Me (mickey), and all (ball). Sorry again Jordan...no Dada. We are working on it though!

We see Ms. Shelby, the LSLS, every week as well. Jordan meets my mom and Brody in Lexington for these appointments. Brody likes to perform for Ms. Shelby. He usually does more talking for her than anyone! Today he imitated ell-o (yellow) and a few more words that we had not heard before.

Brody also learned to put the magnet of his processors back on by himself! It turned into a game for a few days. Now we can tell him put it back on and point to our heads and he will do it. We are working on the ear hook next, but it is a lot harder!

Brody has also had some fun thrown into his life.


We took Brody to his first Louisville Bats game. We had awesome seats (2nd row). Brody did great until people sat down in the 1st row and he wasn't able to see the game anymore. He then proceeded to eat two hot dogs, nachos, animal crackers, pretzels, and peanut butter crackers.

The Fromholts' have a yearly tradition of going to the Notre Dame Blue Gold Game (their spring football game). Brody went last year but slept through the majority of it. He stayed awake and active through most of the day, but finally crashed when we went to the bookstore to go shopping. 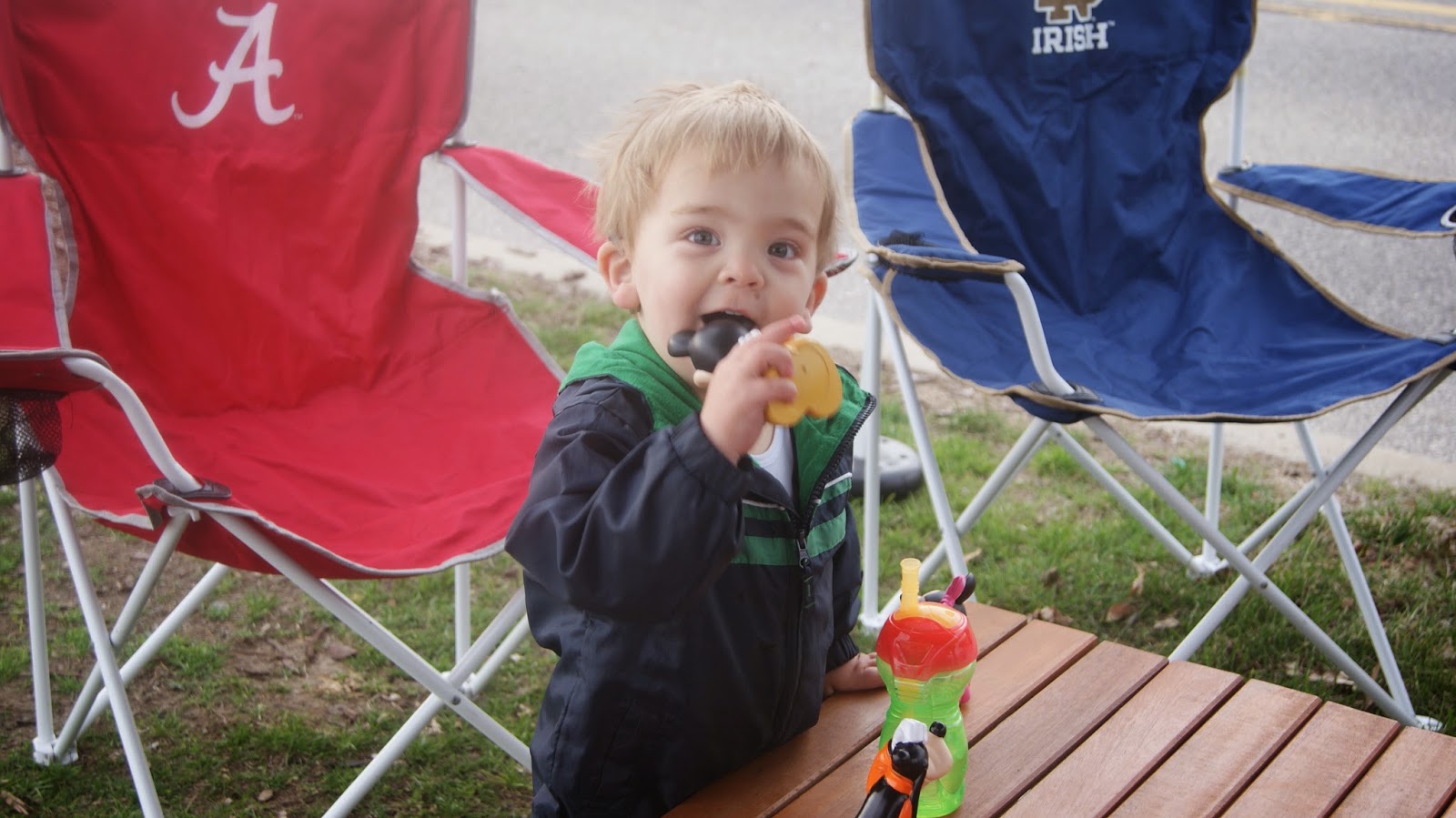 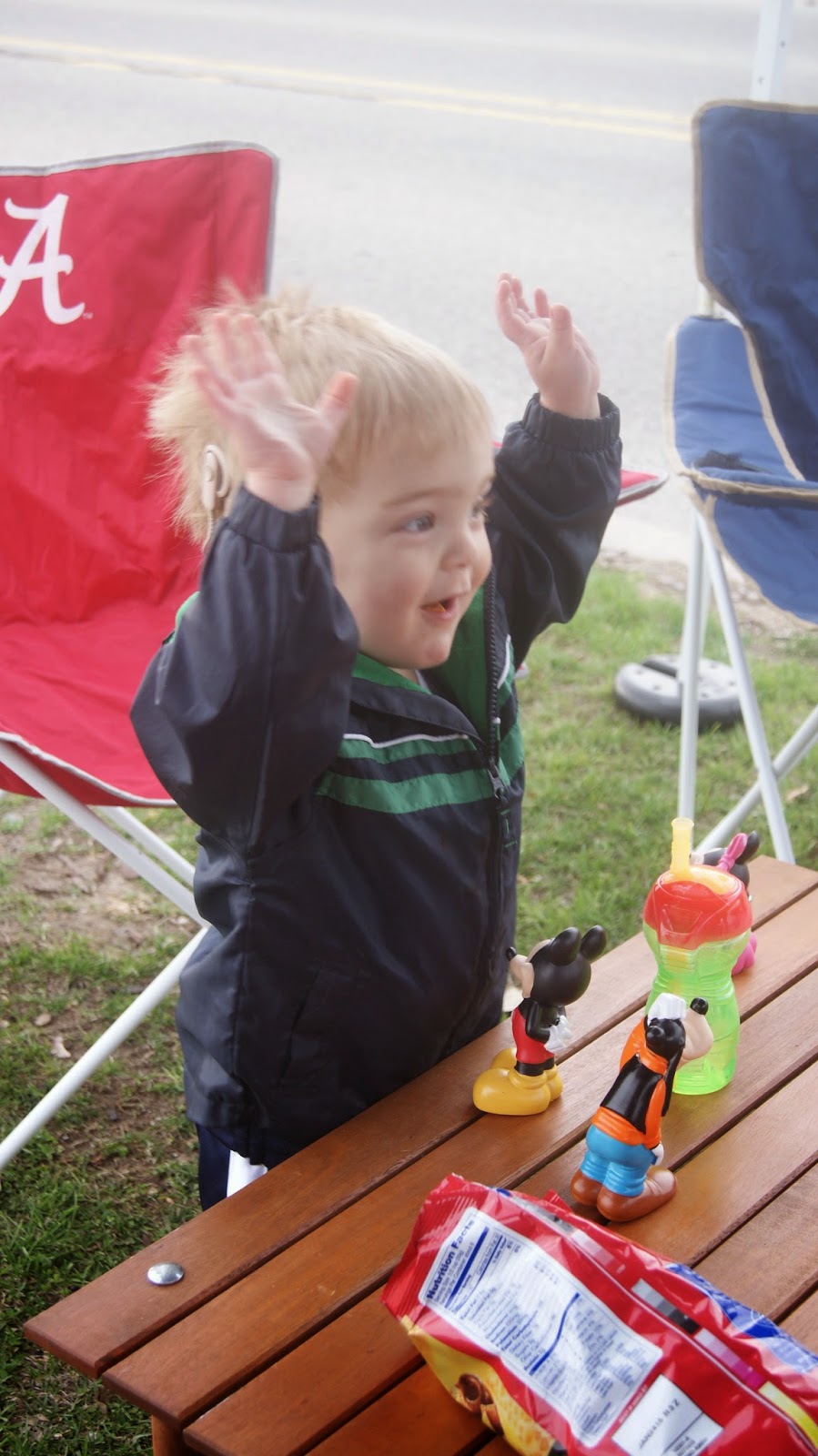 Every year, the Fromholts' also take a boys picture at the game. We had about 20 candid pictures. 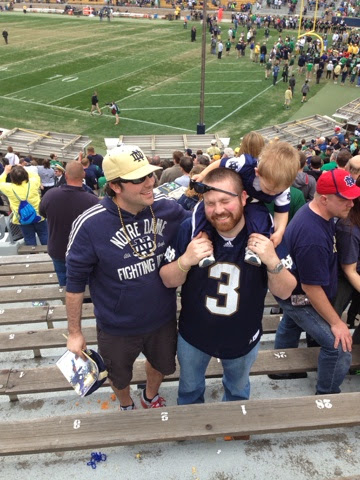 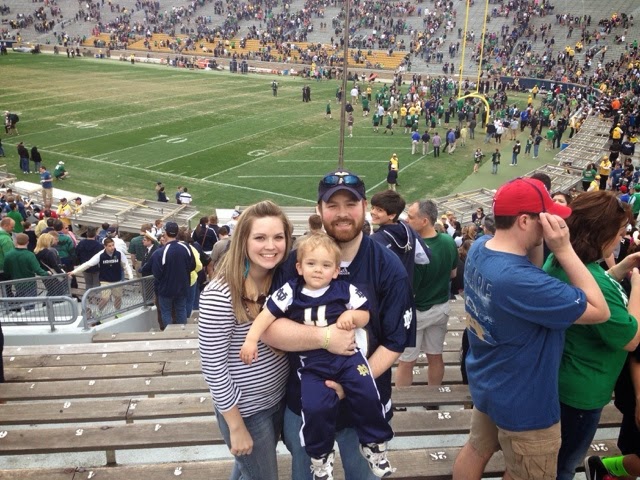 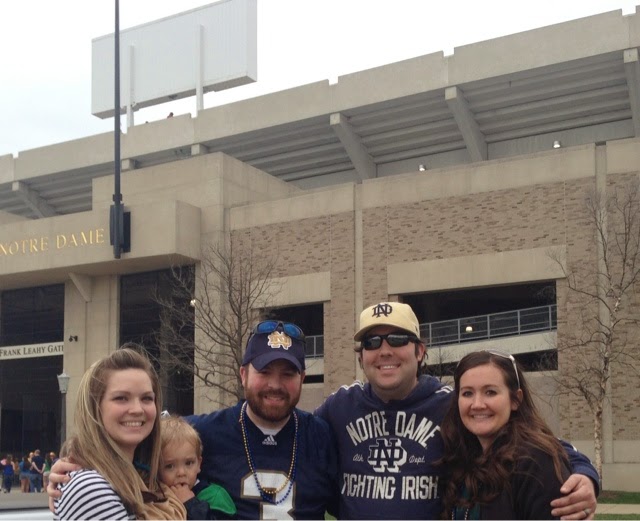 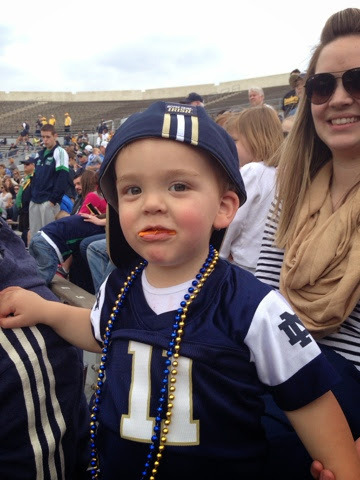 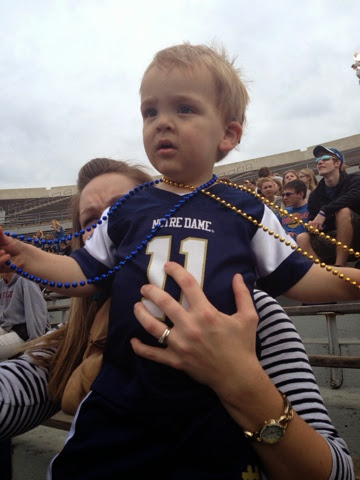 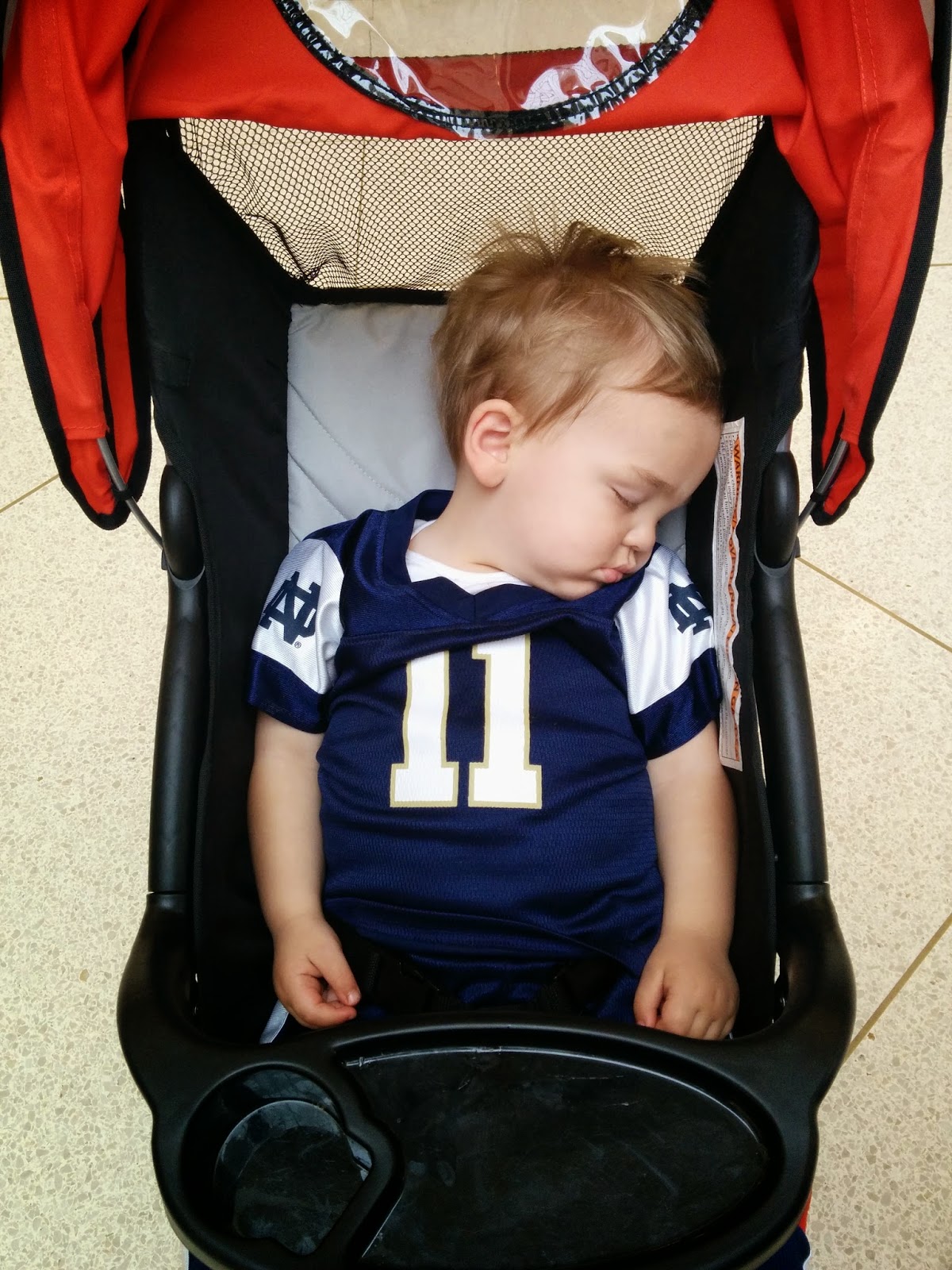 We headed to Alabama's A-day game (their spring football game). Grandma and Papa Brown tagged along too. We had never been before and Jordan found a lot of "upgrades" to add on to our free tickets. We toured the game day locker room (not the cool practice one with the waterfall jacuzzi...way to let me down, Jordan), walked on the field, and had passes to the all you can eat (and Air Conditioned) buffet and seats with backs. It was a fun birthday weekend! 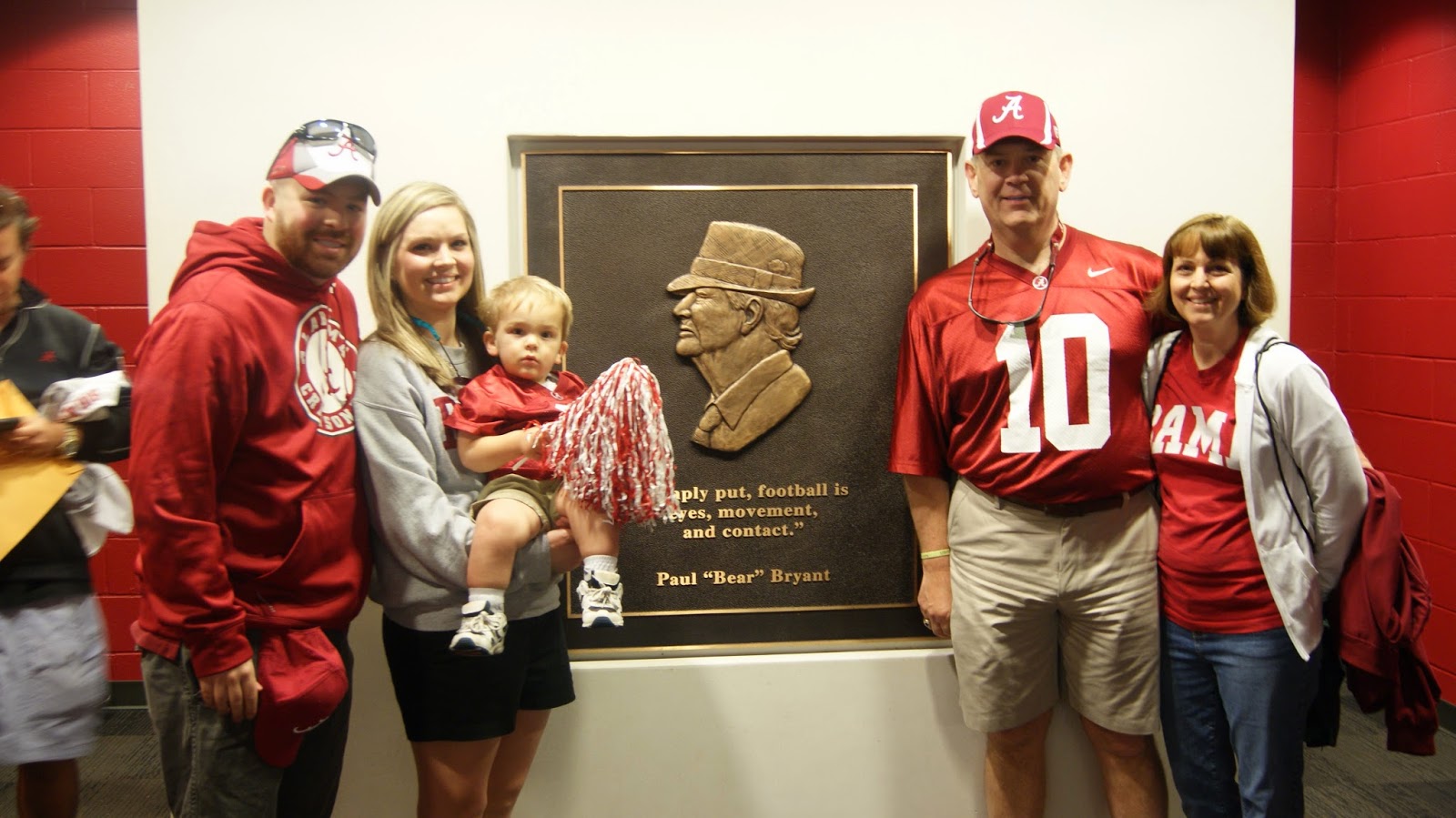 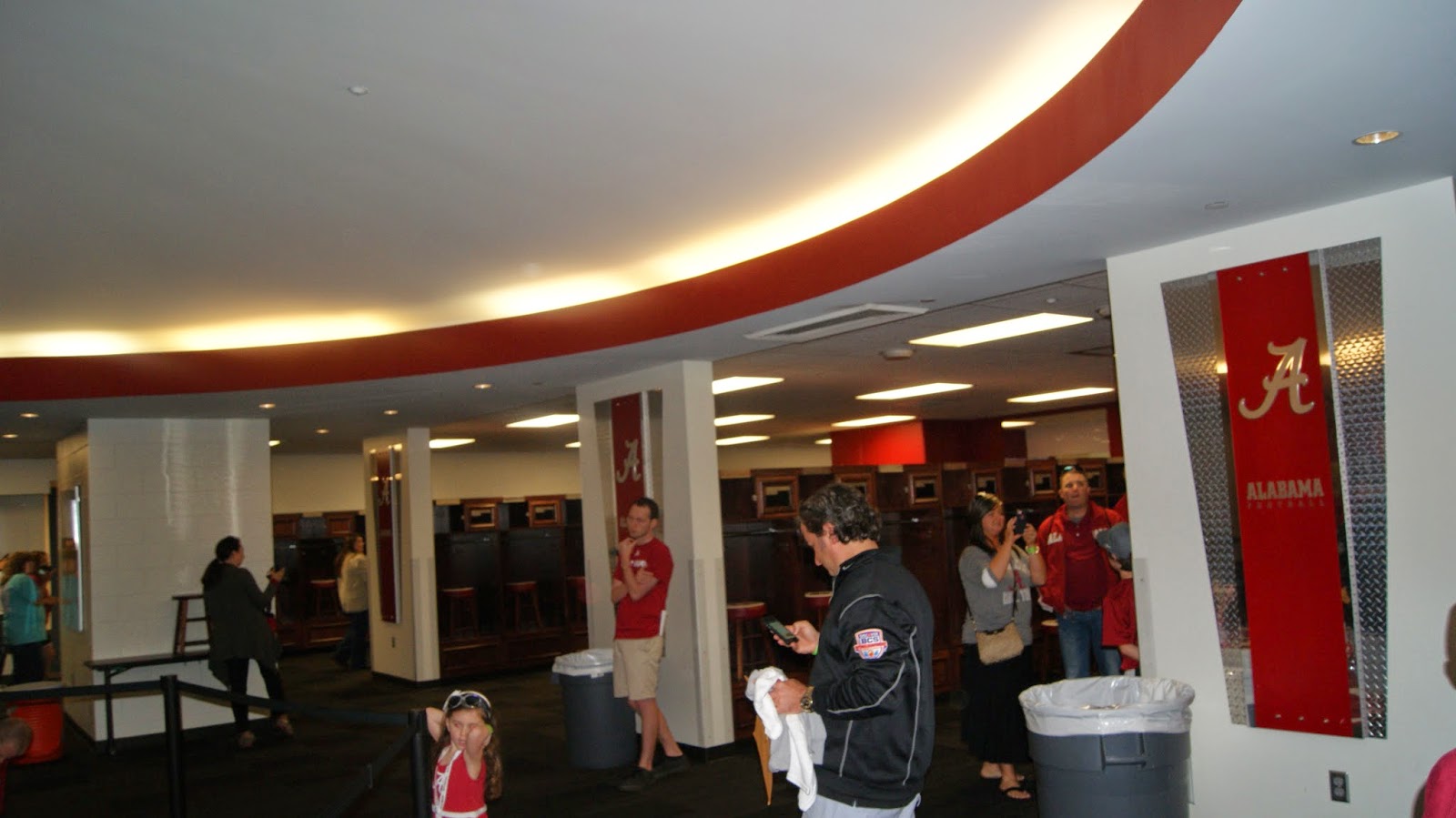 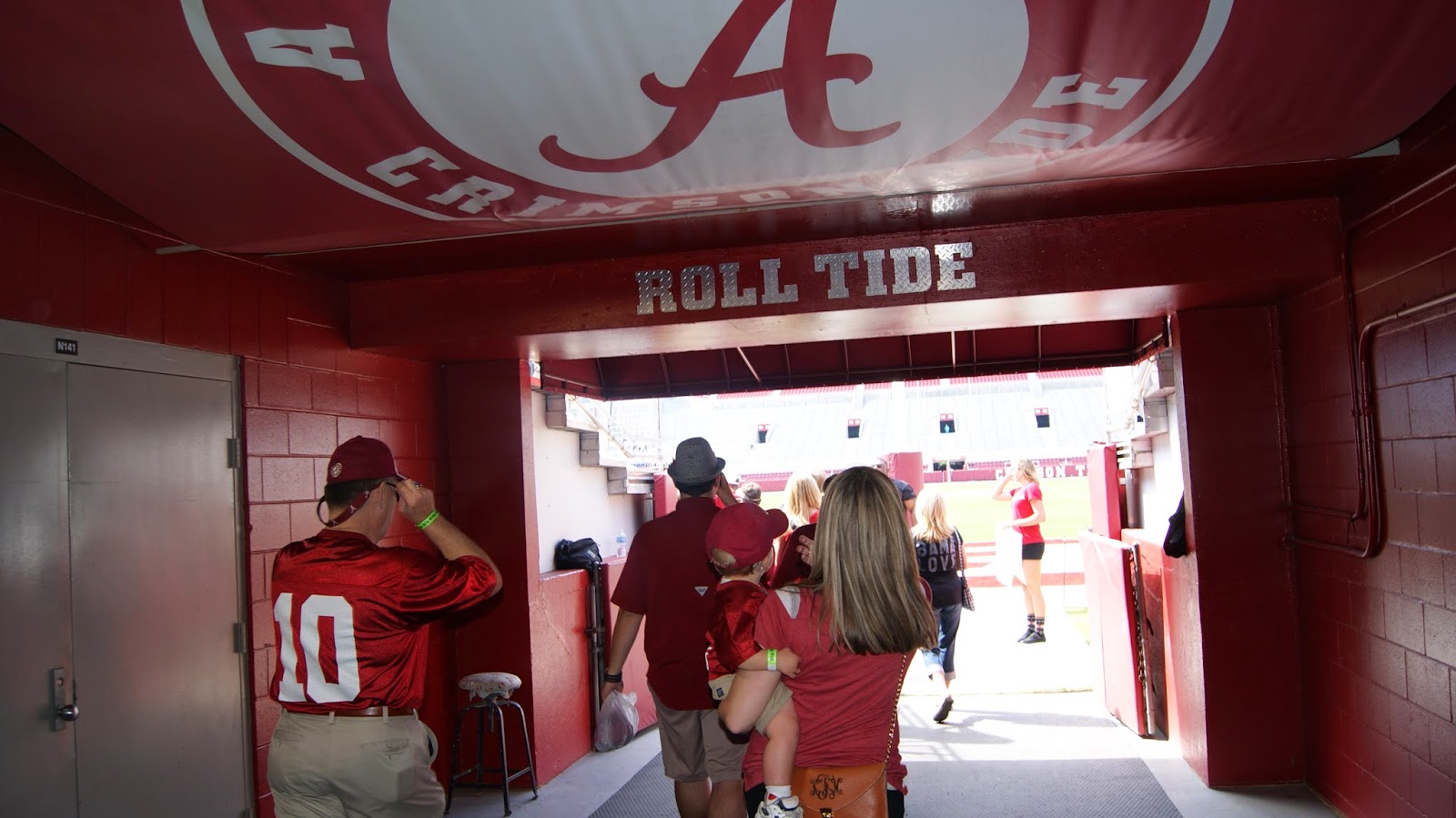 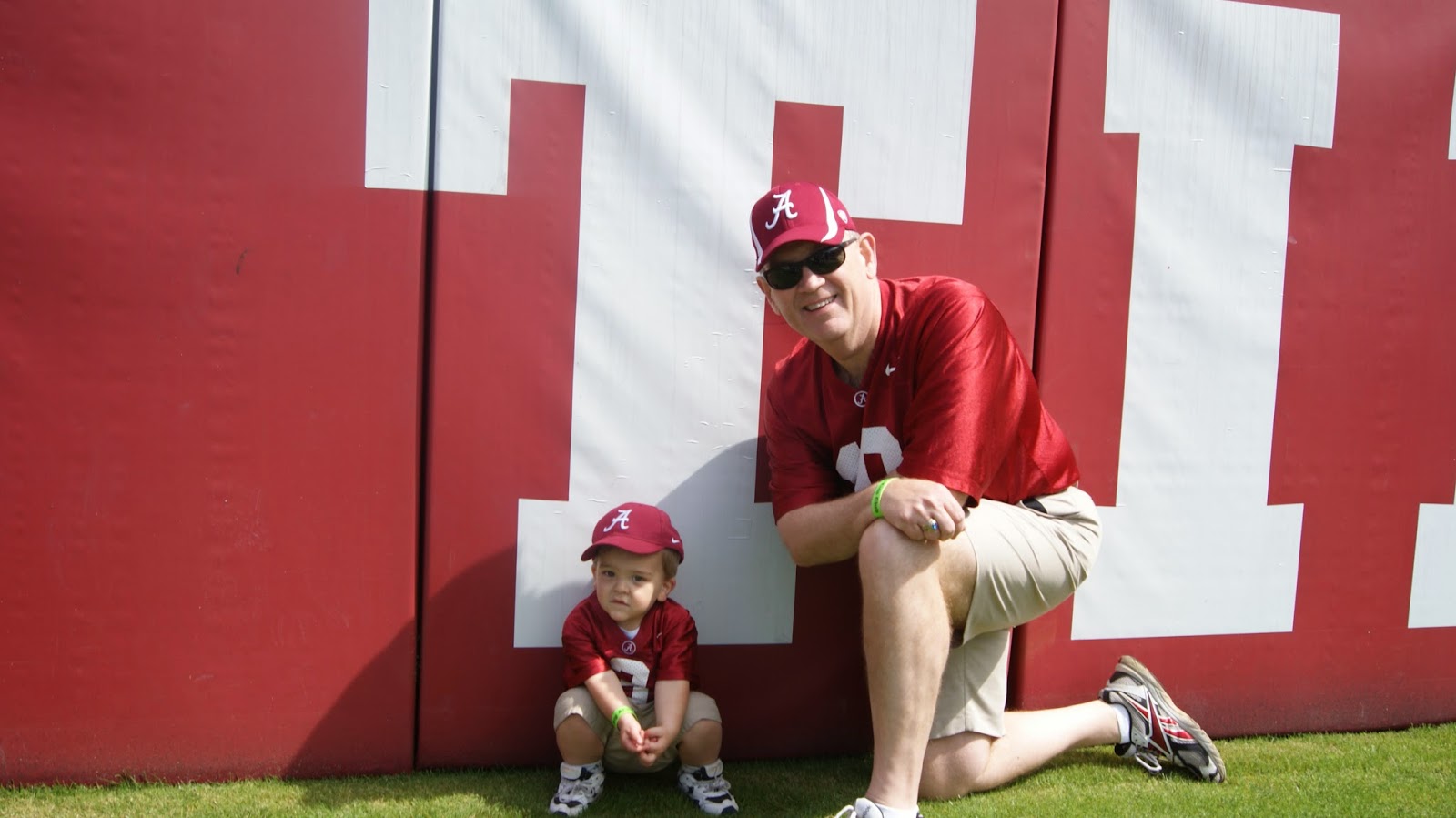 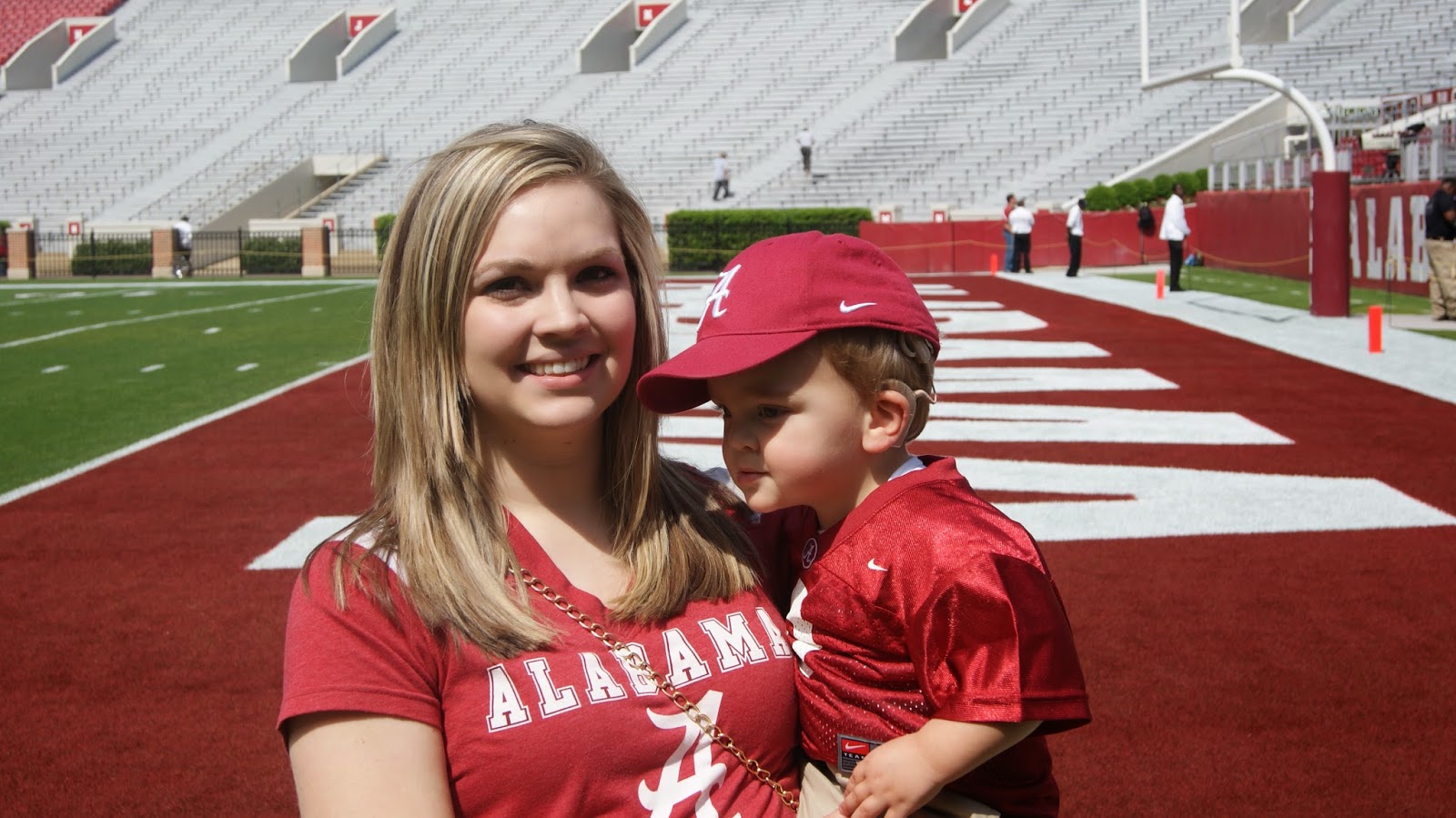 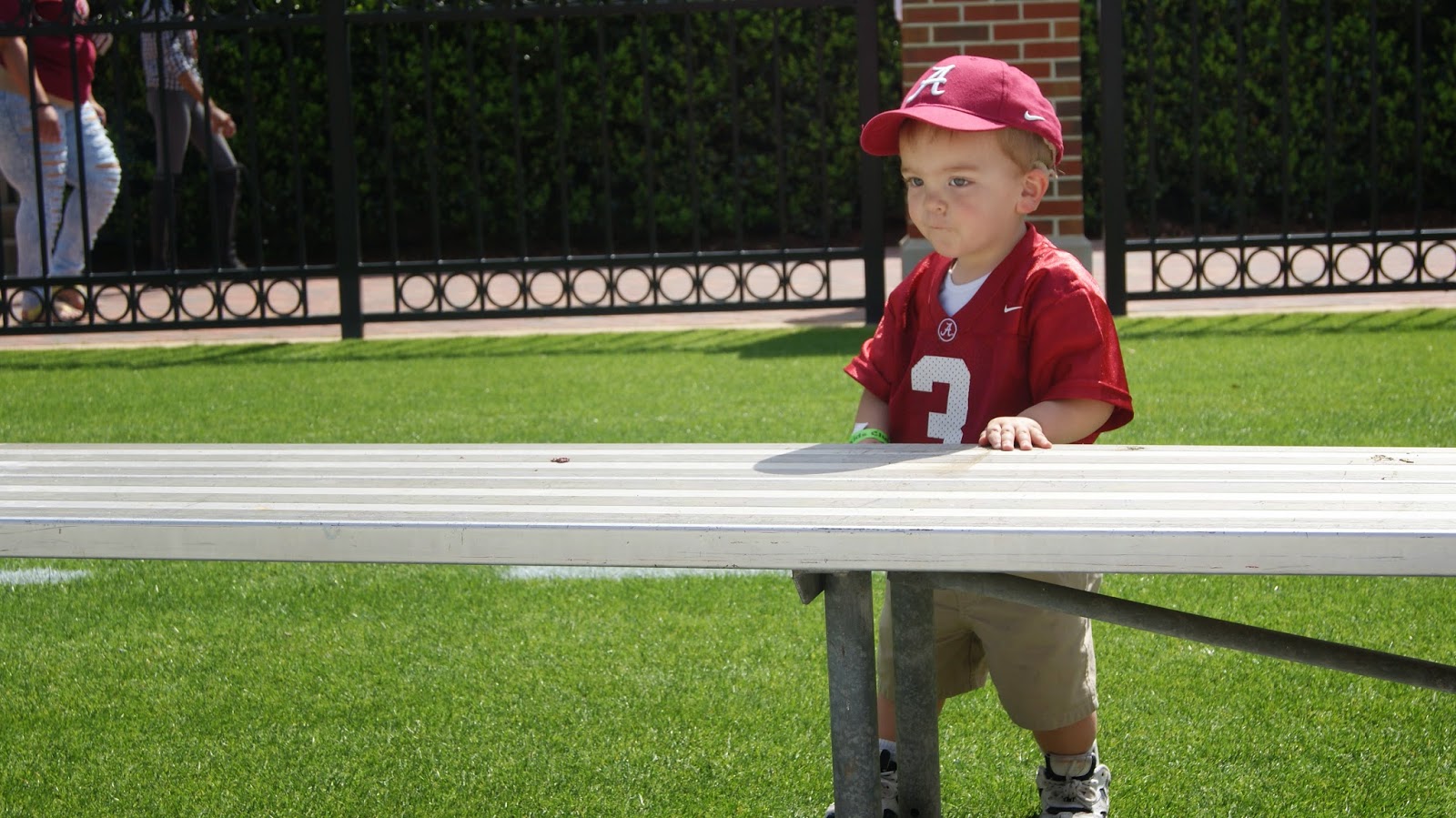 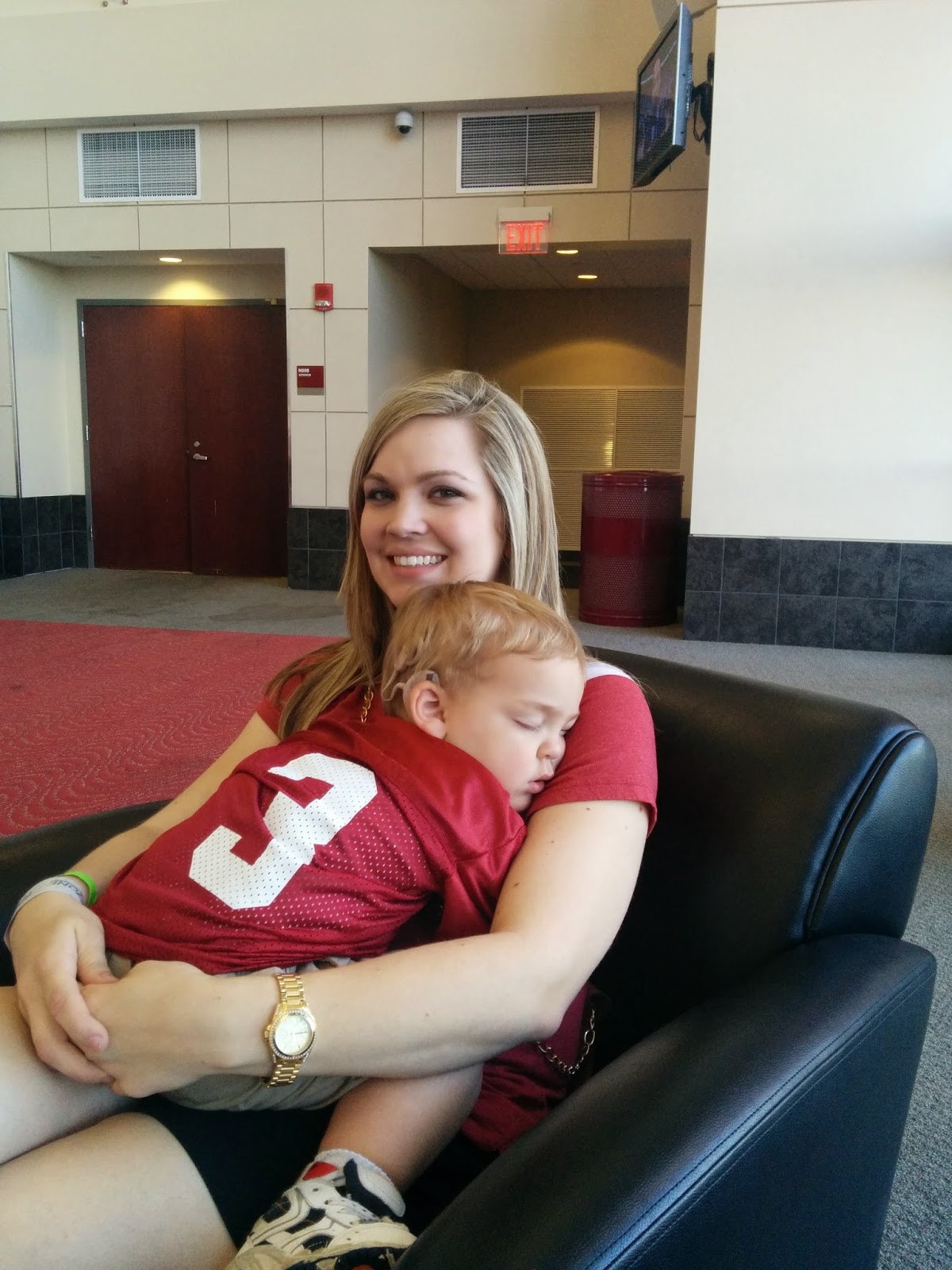 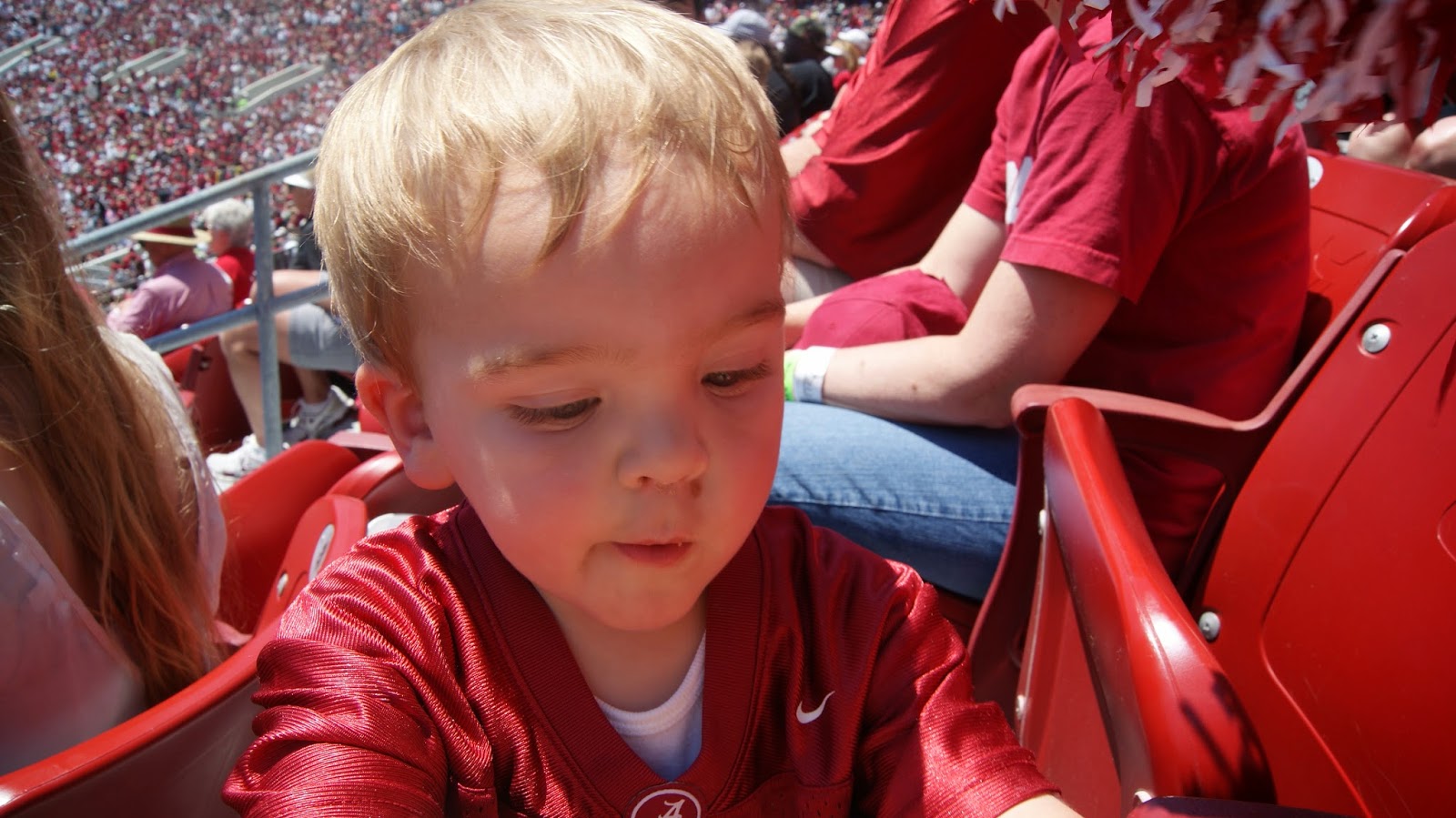 The Easter Bunny found the Ninja Turtle Brody in Alabama! He wasn't that trilled with his basket from our Easter Bunny, but loved the basket Grandma's Easter Bunny brought. Guess I'll let the bunny know he needs to step it up next year! 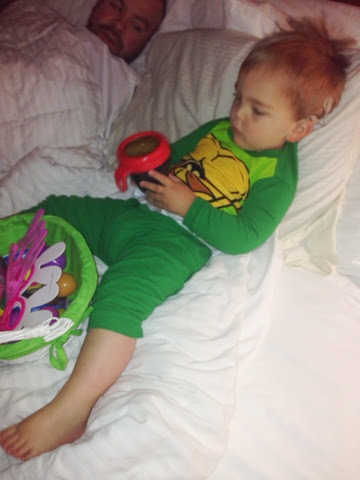 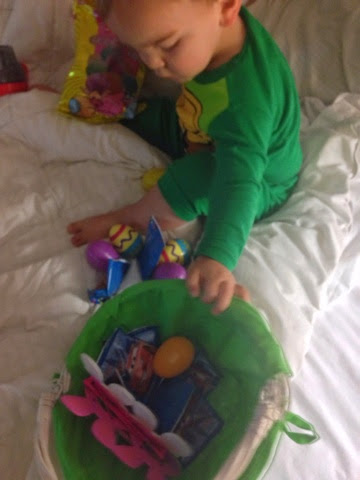 We dyed Easter eggs once we got back home. Brody loved it! He was so amazed that the egg went in white and came out a different color. The little things in life! 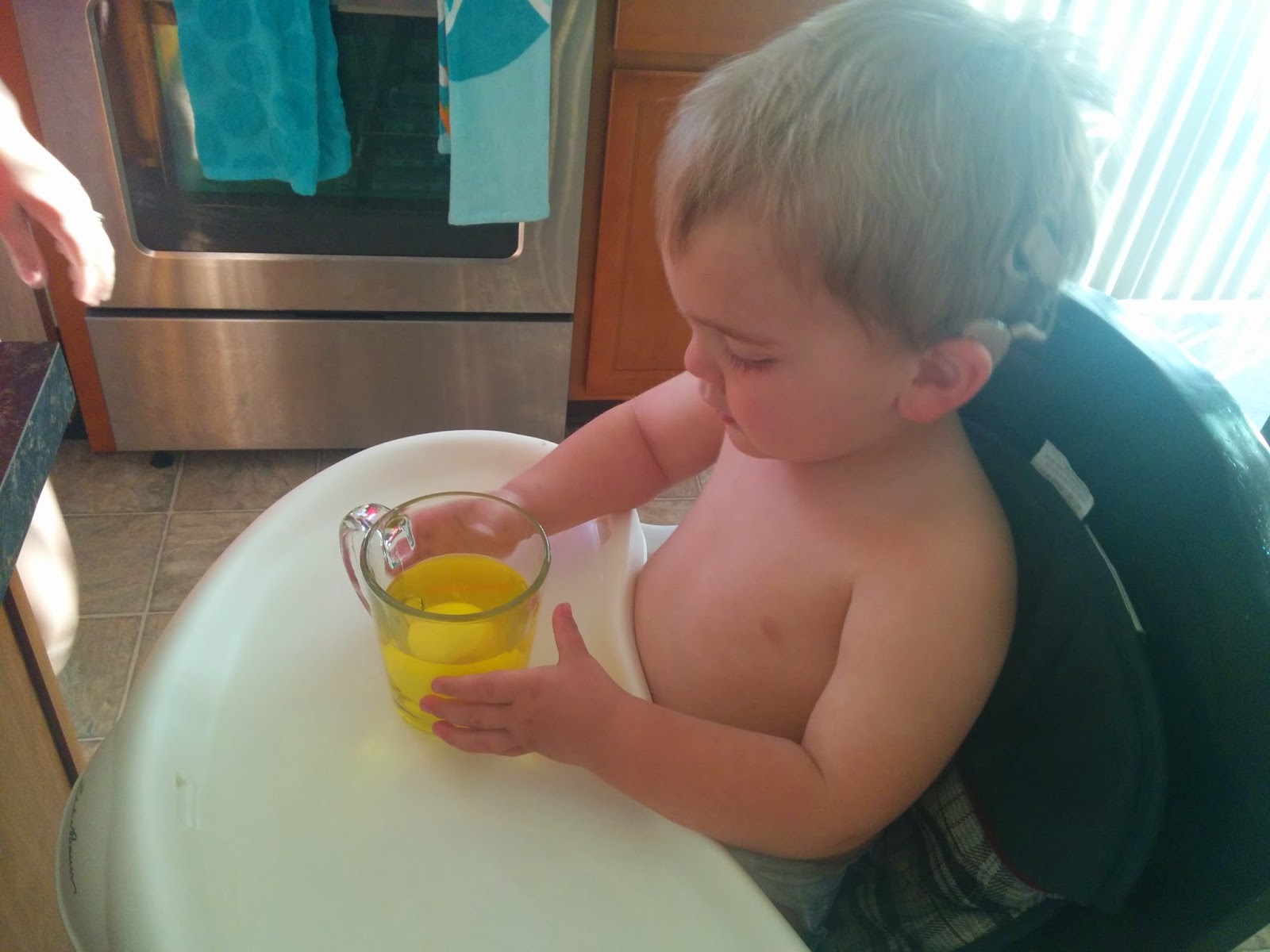 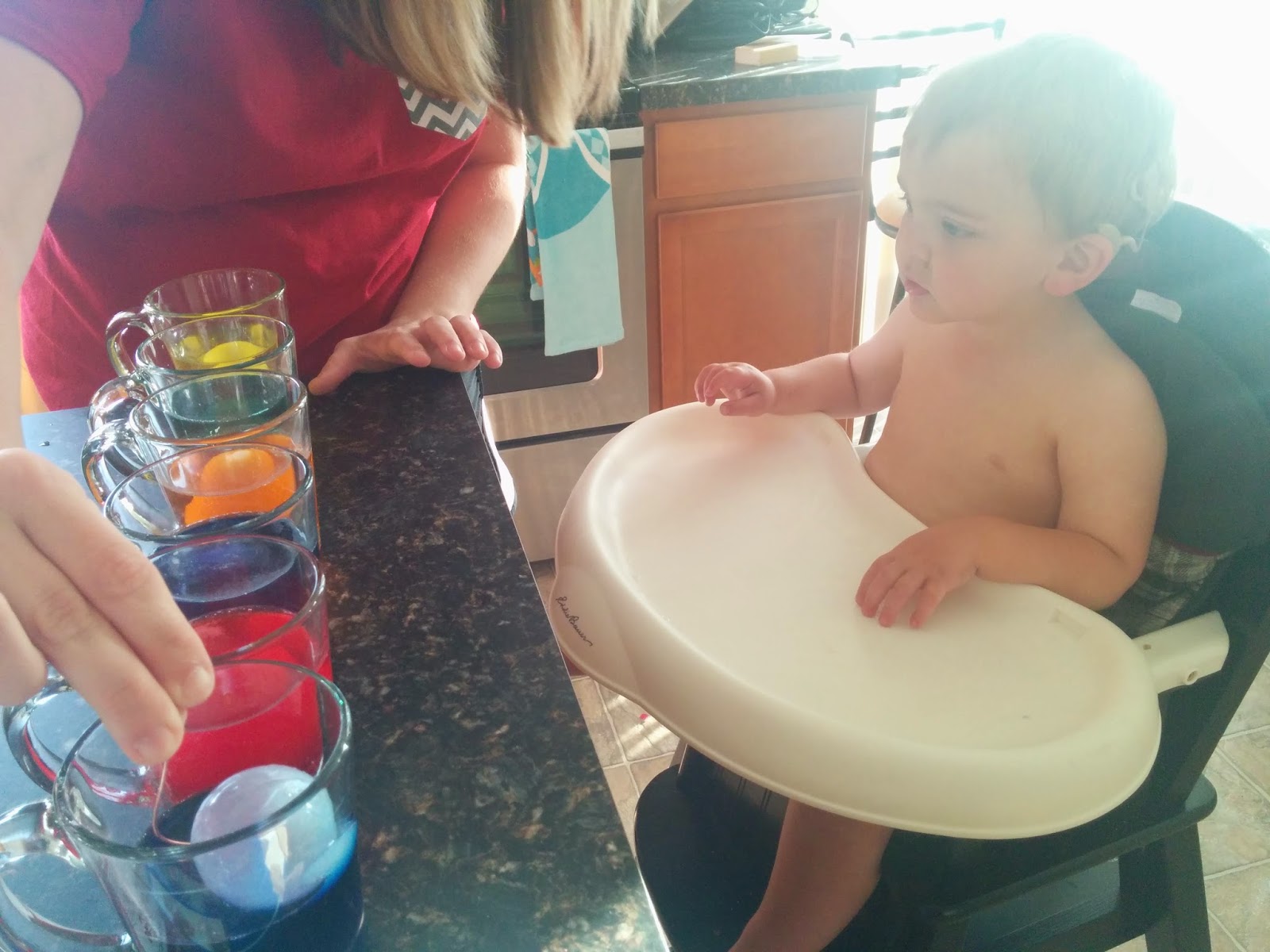 And one more video for fun!

Posted by The Fromholt Family at 7:16 PM No comments: 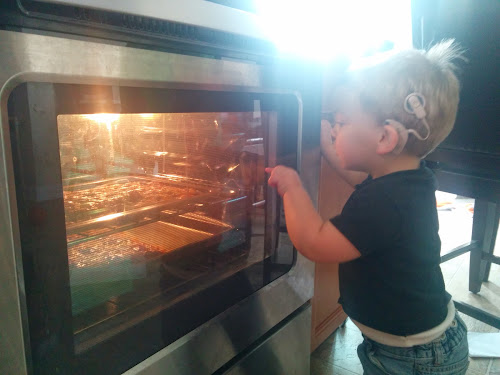 Brody's new found love...watching the food in the oven!

Well our spring break was spent like many others from what I have seen on Facebook. We got the stomach virus going around. :( Monday, Brody and I did some gardening. Our poor neighbors haven't reported us to the HOA yet, but I'm sure it's coming. He wasn't a fan of getting dirty and the grass is uneven which isn't fun for a new walker. Tuesday, Brody and I went to Lexington to meet Jordan on his lunch break. We came home and played outside awhile. Brody loves his basketball goal that Grammy and Papa Tom gave him for Christmas. He is now tall enough to dunk on it, which makes him feel like a big boy! 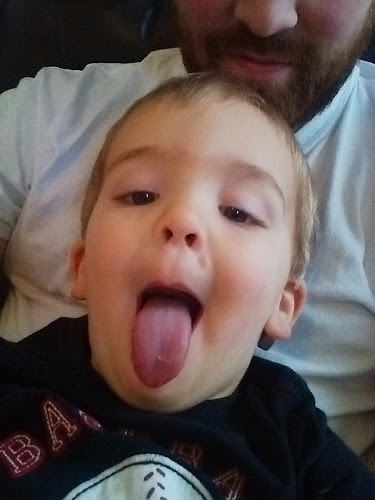 We have been working on "Roll Tide" for the A-day game (spring football game) in a few weeks. I got something close at the end of the video.

Tuesday night we cooked out before the rain came in. Brody ate corn on huge cob for the first time. Last summer we cut the corn off the cob. He thought it was so cool! 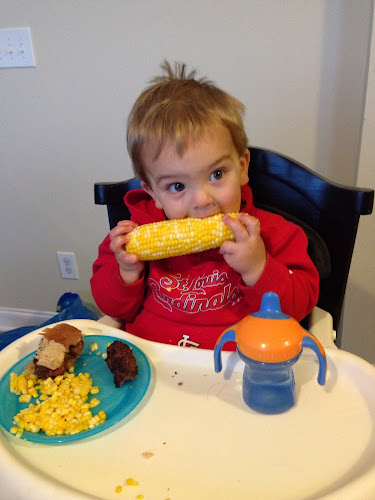 Then Tuesday night, the stomach virus hit Brody and Jordan. I felt a little qeezy, but not too bad. I just thought it was food poisoning from the burgers we grilled out. Brody seemed fine the next day, so the mean wife that I am, I told Jordan to suck it up. Oops! Brody hung out with JoJo and Grandma, and got them sick. Guess it wasn't food poisoning. He woke up Friday morning sick again, so I took him to see Dr. Sammons (his awesome pediatrician at East Louisville Pediatrics-highly recommend her). He was pretty pitiful all day yesterday. 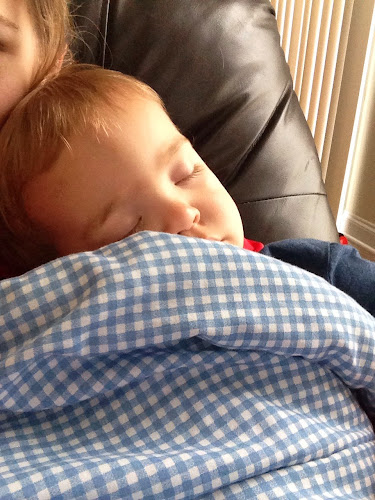 He took a four hour afternoon nap and woke up feeling much better! We went to the Shelbyville Easter Egg Hunt at the Red Orchard Park. They had 4000 eggs hid in a field with about 100 kids searching. We had never been over there before, but is think we will be going back a lot this summer. They have a nice playground with othe playground stations around the park. There is also a dog park and a horse park. Brody would love to watch the horses exercise!

Grandma has been hiding eggs around her house and having Brody find them. He gets the principle of the hunt, but would rather see what's in the eggs. He found about 12 eggs while the greedy kids with parents not paying attention to the rules had about 80 each. :) Sometimes it's really hard for me to control my "teacherness!" After about 5 eggs in, he realized they had Candy in them and really wasn't that interested in finding more. 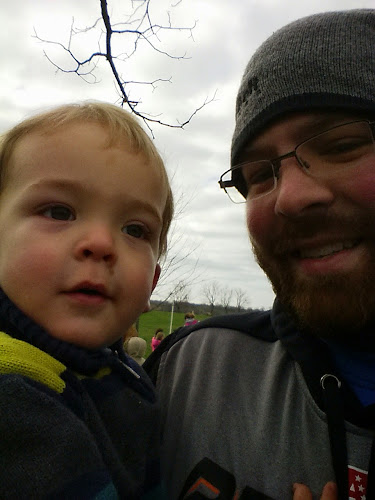 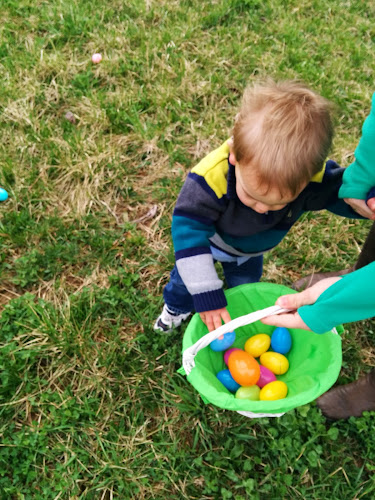 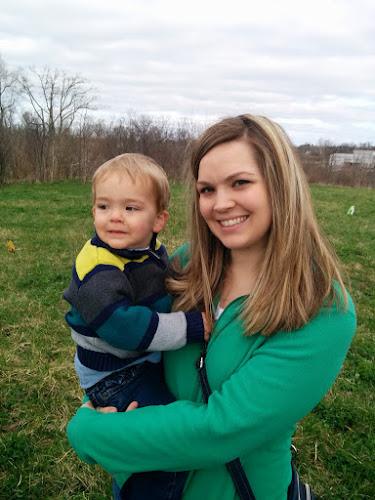 He loved the cookie break, but was too afraid someone was going to take his cookie. He shoved it in his mouth as fast as he could! 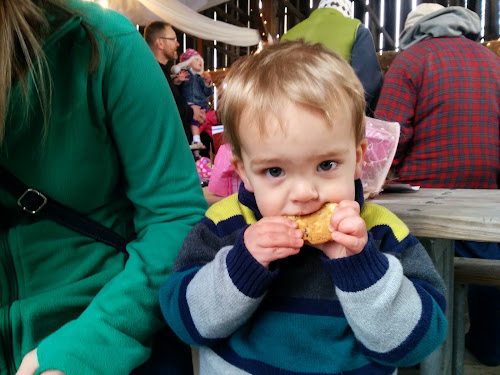 We saw the Easter bunny. It went much like Santa, but he wouldn't even sit on his lap! 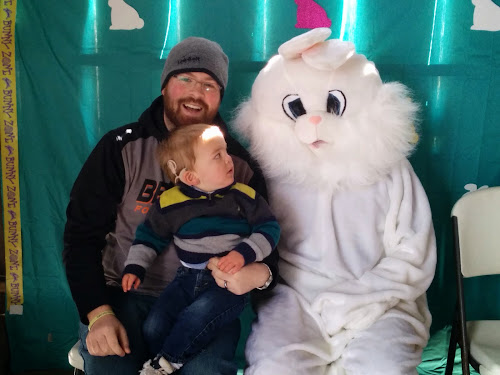 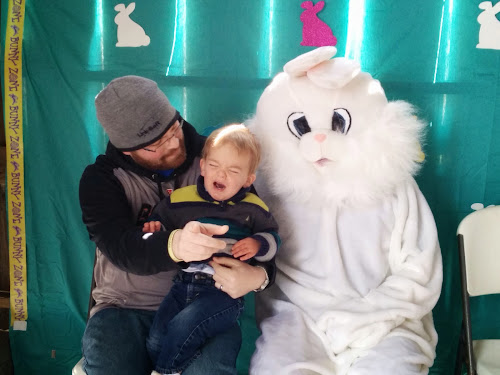 Posted with Blogsy
Posted by The Fromholt Family at 11:59 AM No comments: