The Louisville Zoo and More

Brody has continued to do little things to surprise us all week. He said "oh-oh" for JoJo (my grandmother and Brody's favorite person). He has also "ah-ah" for Papa. Still no mama or dada but I know it's coming. :)

We have had a zoo membership since Brody's has been alive. He hasn't really been interested in the animals until this past weekend. He love it! 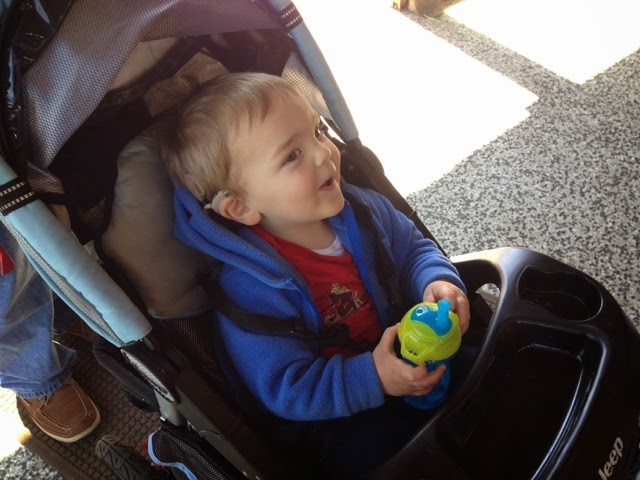 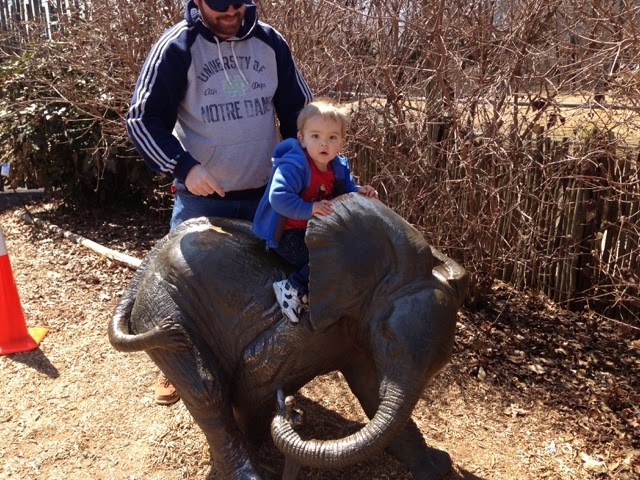 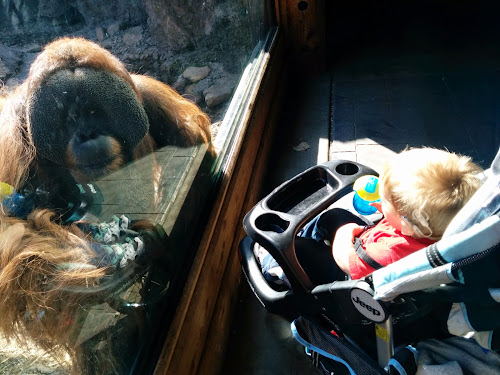 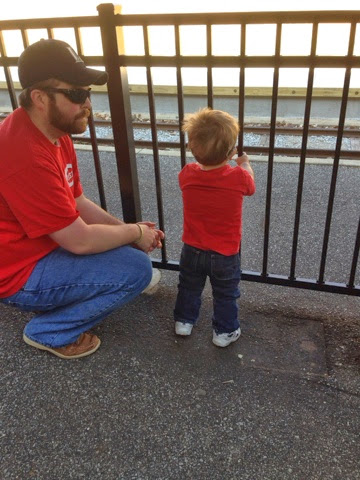 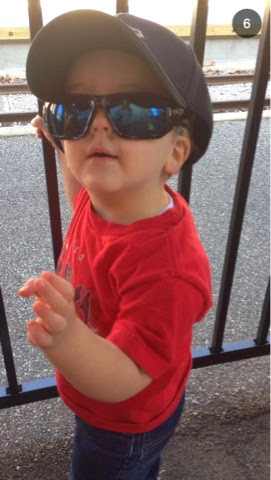 Listening on the train...where's that voice coming from? 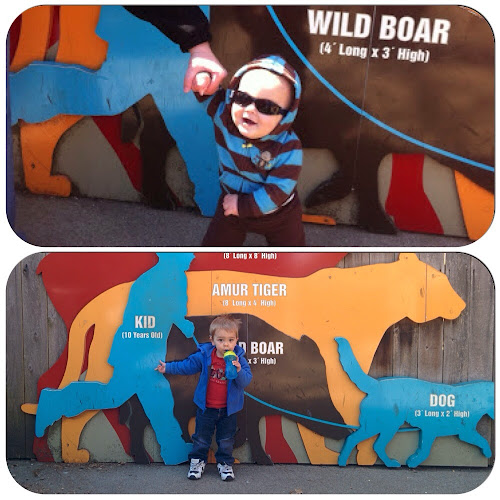 Top was last year at the zoo. Bottom is this year.
Brody enjoyed Aqua Therapy with Ms. Melody again this week. It's amazing how much being able to hear changes things! The lighting is really bad in the pool area so the videos aren't the best quality again.

The state of Kentucky has been crazy over the last week. For those of you not following March Madness, Kentucky and Lousiville played. Since neither Jordan not I had a team in the fight, Brody went with Aunt Sara and Uncle Dany's team (they both graduated Louisville) with a little blue for Kentucky (go SEC)! 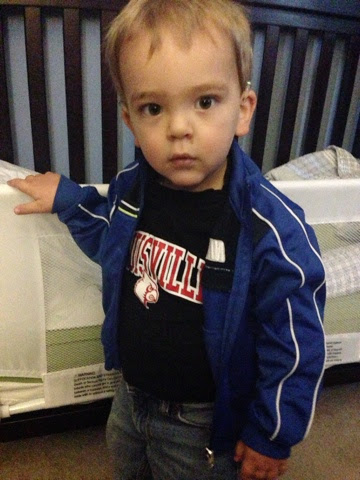 And because I didn't have any Kentucky attire, I found this this weekend at the Shelbyville Consignment Sale. 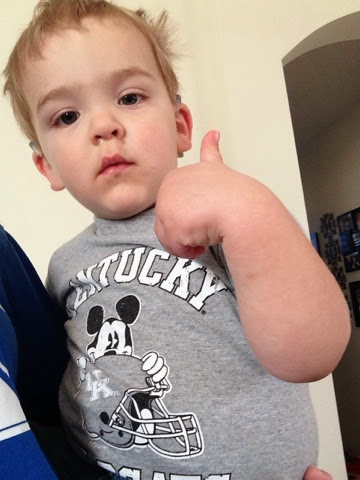 Grandma and Papa Brown gave Brody a shaving kit for Christmas. He has become very interested in the shaving cream this week. 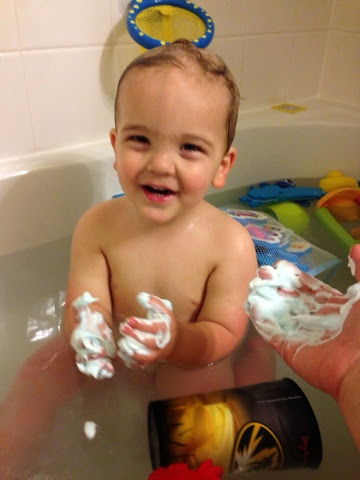 Saturday, Brody hung out with Grandma and Papa Brown while Jordan and I attended a friend/coworkers wedding. Such a pretty bride! 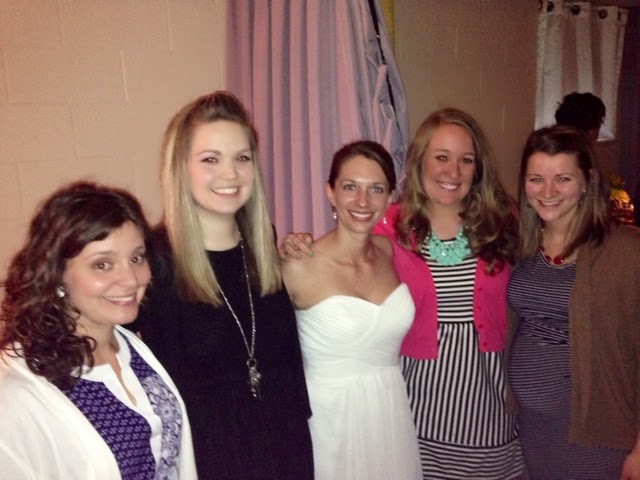 And of course the highlight of Brody's day...IT'S OPENING DAY! Basketball will be over soon (thank goodness). I am ready for some STL Cardinals! And as usual, Brody is a house divided kiddo. 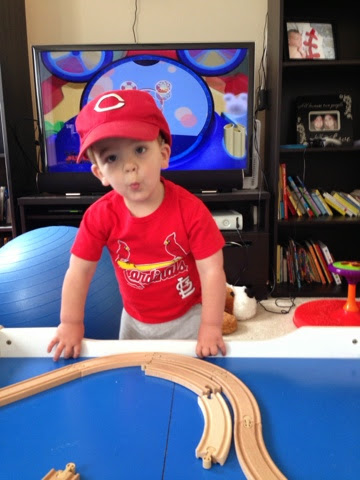 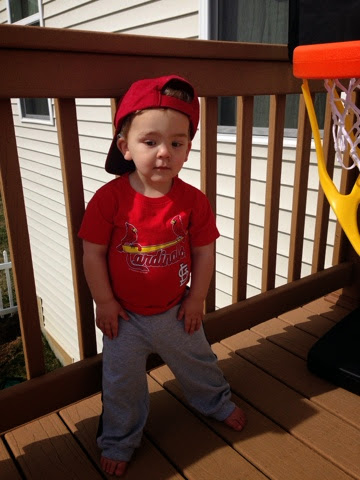 Posted with Blogsy
Posted by The Fromholt Family at 2:54 PM No comments:

Are we done with snow??? 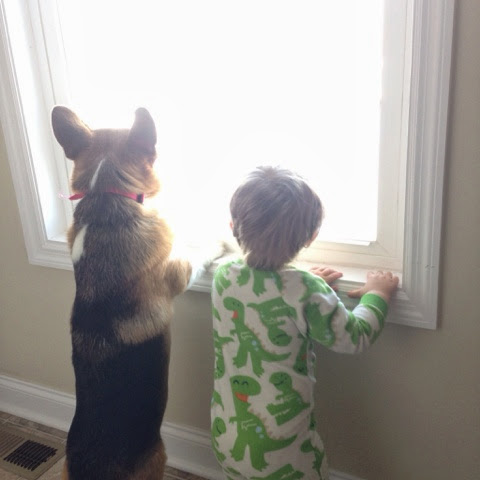 We have a walker! He still not a great walker and has a black eye, busted lip, and bruised forehead to prove it. However, he walked from the living room through the kitchen and hallway to the stairs last night without stopping! Go Brody! His physical therapist and occupational therapist were both very pleased with his progress over the last two weeks. They said his core is getting stronger and his balance is improving. Brody is starting to be able to catch himself so he won't faceplant as much.

We met with his audiologist, speech therapist, and listening and spoken language specialist (LSLS) two weeks ago. Brody performed around 20-25 decibels on his audiogram...that's in the normal hearing range people! Go little man! He did so well in the booth too. Dr. Scott reprogrammed his processor maps and adjusted one ear a little louder than the other since he did a little bit worse on that ear. Brody could hear the beeps and thought that it was a doorbell each time. He kept looking at the door to see who was there. He sat in Dr. Scott's lap for a little bit and watched the graphs change on the computer as it was programming and measuring. 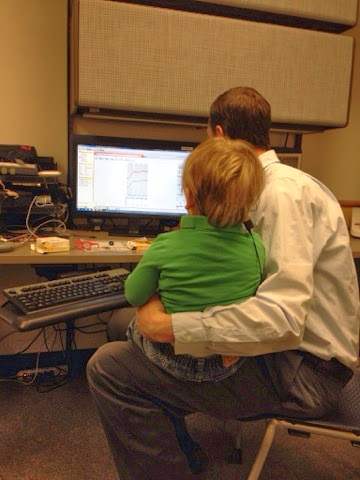 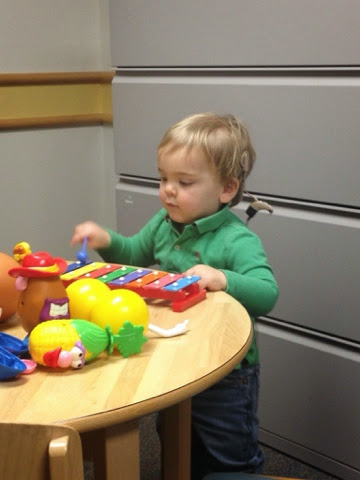 He got to spend the rest of that week in Cincinnati with Grammy and Papa Tom. Grandma and Papa Brown went to Panama to visit Aunt Sara and Uncle Dany. Brody also got a big boy hair cut while he was there...no boy southern boy hair :(

We went to the Louisville Family Fun Fair. I wasn't too impressed with it. Maybe it would be better if Brody was older. He enjoyed a few of the activities. The policemen running the safety course were pretty impressed with his knowledge of green light mean go and red light means stop. Brody refused to move when the light was red so they had to switch it for me to get him out of the course. Smart kiddo. 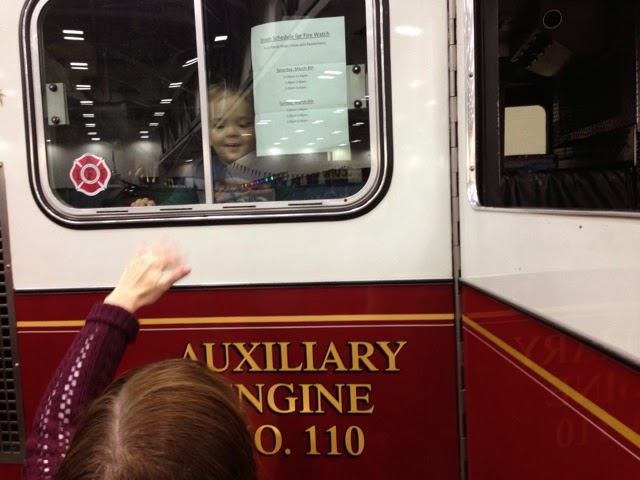 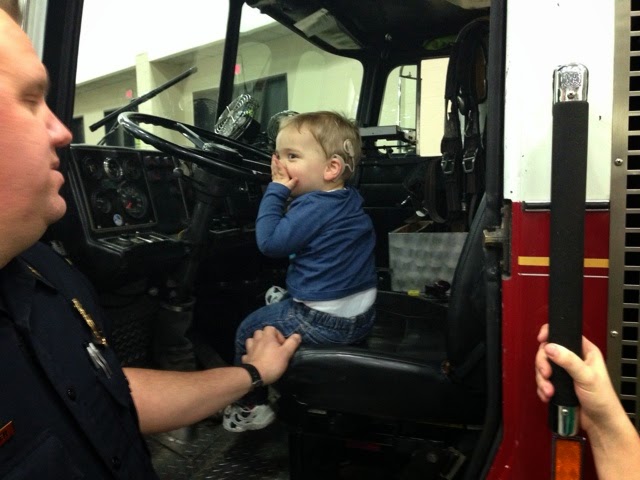 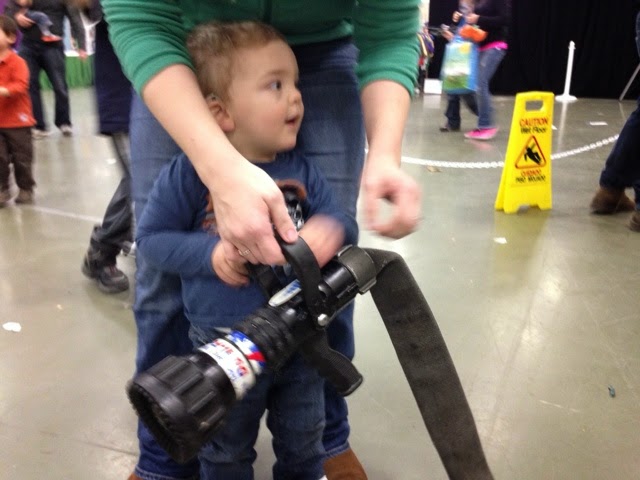 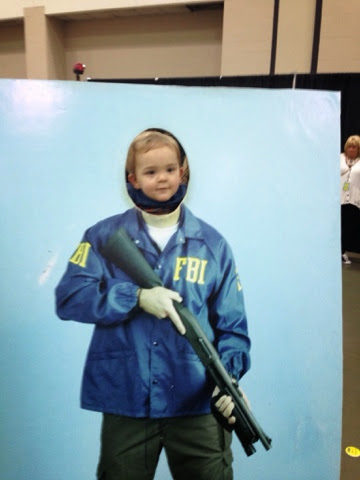 We also took Brody to his first St. Patrick's Day parade on Bardstown Road. It was fun other than all of the rude parents not watching their children. The teacher in me couldn't handle it! Brody was happy being sugared up on all the free candy! 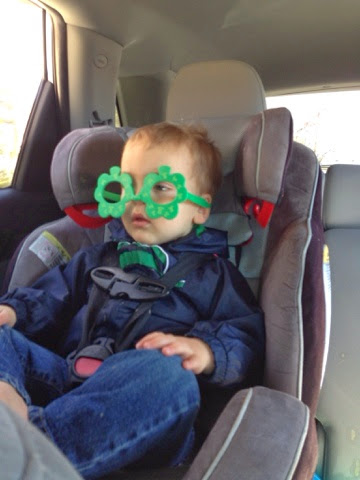 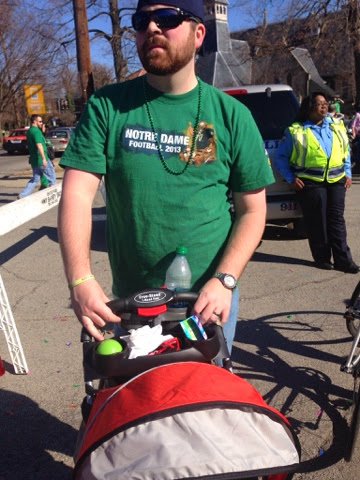 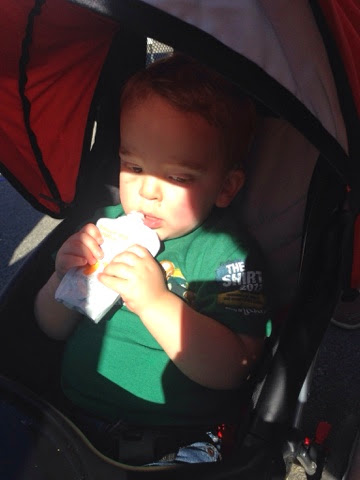 Brody has become very vocal lately. He is using sounds along with his signs, but is still relying on signs more than speech. I think he is getting a little frustrated because he can't put the sounds together. We still have a lot of vowel sounds and not many other sounds. We are working on mama, dada, and those repetitive sounds. Supposedly he says Papa, but I haven't heard it yet! He listening skills amaze me everyday! He is discriminating between three objects and can find things in pictures of a book. He is starting to follow directions like go get your shoe, pick it up, etc.

We also had a breakthrough this week at aqua therapy! We finally got the rechargeable batteries we have been waiting for. We were able to use the aqua bags and Nammu hat and swim with the processors on! The aqua bags are just plastic bags that you put the processor in and can seal it up so the water doesn't get in. The Nammu hat is made from bathing suit material and just hels hold the processors on since the bags are a little bulky. Now we are thinking that he threw so many fits because he couldn't hear for an hour in the water...duh mom! The videos are super blurry, but you might be able to see a little sorry! 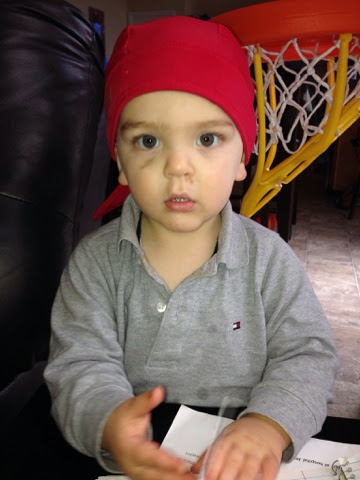 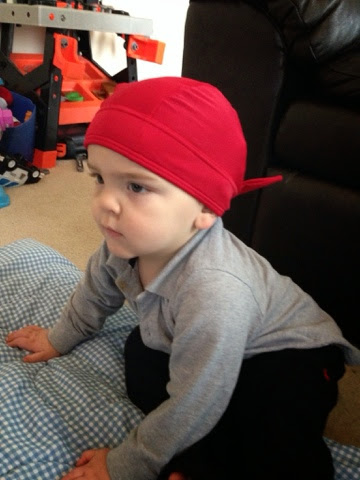 Brody has been pretty good keeping his processors on lately. He usually only takes them off when he is really mad, tired, or in the car. He is starting to put the magnet back on himself when it falls off. If he can get it the first few tries anyway, if he can't get it he gets frustrated and throws it! Today he had taken them off in the car, so I rolled the window down for him (we don't roll the windows down...open window = thousand dollar processors flying out the window). Brody had the best time with the wind. He had his tongue out like a dog and arm on the window. The pictures don't do it justice! 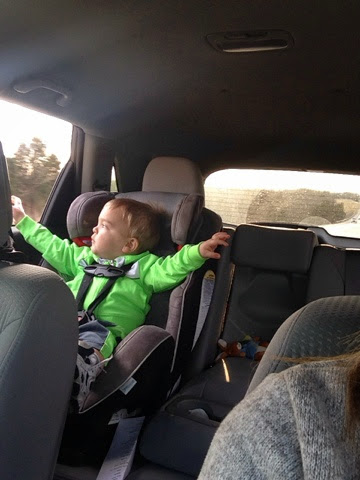 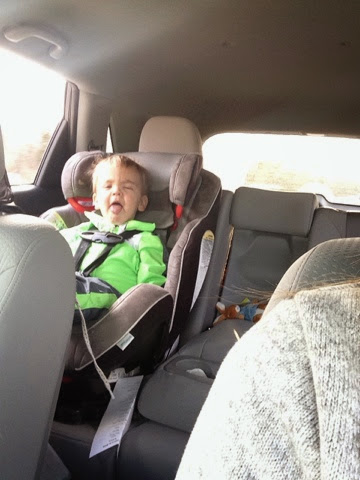 And just some cuteness...

JoJo (my grandma) and Brody had so much fun! 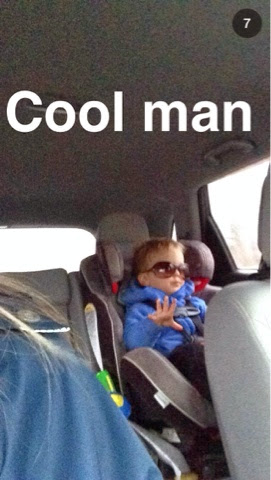 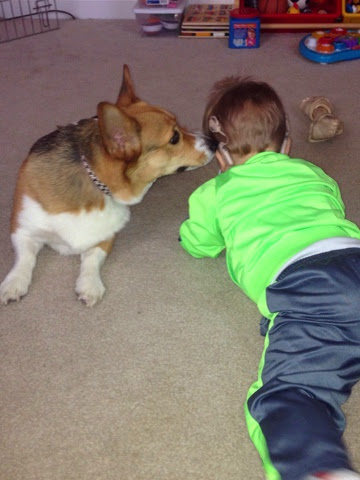 Posted with Blogsy
Posted by The Fromholt Family at 4:07 AM No comments: