Because of cochlear implants, Brody's life has been changed. Without the implants, he wouldn't have any access to sound. With hearing aids, the sound had to be as loud as a train horn for him to hear. Even then, we weren't sure if he was actually hearing it or just reacting to the vibrations caused by a sound that loud. He wouldn't hear us say we love him, wouldn't hear his baby sister's heartbeat, wouldn't hear "uptown funk you up," and wouldn't hear everyday speech that has allowed him to function in a regular education world with little supports.

Receiving the implants weren't the only piece to the puzzle that was missing. With the surgery came intense therapy. Not just having a therapist (or 3 or 4) come work with him for an hour a week. We have "therapy" all waking hours. During meatimes, bath time, playing, even when watching tv, we are bombarding Brody with vocabulary, drawing his attention to things happening, explaining what he may miss, and assisting (not doing it for him) when he needs help. He still misses things and is still learning.

Brody has become an advocate for himself. When he knows he has missed something in conversation, he will cup his hand around his ear and say, "what did you say?" When he doesn't understand a word, he will ask "what's that mean?" Brody knows that without his processors on he can't hear you. He recognizes that they help him have access to the hearing world.

We went to a mother son dance on Tuesday at his preschool. He danced the entire time.  Not only danced, but he sang along to the words. He did motions when it said to do so. He sat and talked with a little friend and was able to have a short 3 year old conversation even with the loud background music. 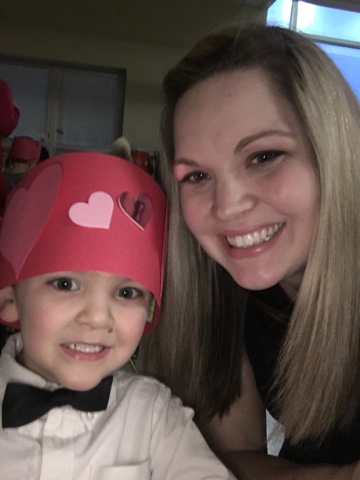 Would I want his life to be easier? Yes of course. Do I wish Brody didn't have to deal with the challenges that are brought on because of his deafness? Duh! Would I change the fact that this amazing kid who is deaf was given to us? Not in a million years! He deafness makes him who he is. The cochlear implants assist in allowing him to reach his highest potential in this world! He can do anything he wants (well other than be an astronaut like he wants...but maybe by the time he becomes a rocket scientist there will be newer technology that allows him to fly in space)!

Who better than Brody to tell y'all why he loves his cochlear implants!

Posted by The Fromholt Family at 3:07 PM No comments: