We met today with the Shelby County Public School system for Brody's Individual Education Program (IEP) meeting. During First Steps (his early intervention here in Kentucky), Brody had an Individualized Family Service Plan (IFSP). This outlined goals that his therapists would work on based on the needs of our family in helping Brody develop. They worked his goals into our daily schedule at home. The IEP is looking at how Brody's delays impact his education. Not that schools don't care about what goes on in the home, but their main focus is the supports and resources that he needs while getting his education.

Over the past few weeks, we've had the initial meet up with Shelby County Public Schools at our house, another meeting at the Northside Early Childhood Center to sign "permission to test" papers, and different evaluations of Brody. Jordan and I went with Brody for his evaluation with a speech and language pathologist. Brody did really well on the test. I thought he would do well, but he exceeded my expectations. When giving these assessments, there is a "ceiling" that you have to meet in order to stop testing. This usually means missing a certain number of questions in a row. Brody never hit ceiling on one of the test. He would miss two then get five more correct. I was amazed! That particular test looked at his receptive (what he comprehends for listening) and expressive (what he says) skills. His standard scores were averaged to a score of 111. The "average" is 100 and there is a standard deviation of 15 so 85 to 115 is the normal range. The kid who could not hear anything before the age of 15 months and has worked so hard since getting his Cochlear Implants for the last 20 months, scored above average in listening and spoken language!!!!! While Jordan and I were over the moon at how well he did, we started getting nervous about him actually qualifying for special education services under the hearing impairment label. We're so glad he is doing what he's doing, but we still think he needs services because he's starting a new environment where he is going to have to listen and participate in a large group (20 students compared to his max of 6 at playgroups). She also gave him a test that looks at his speech sounds. Again, he did well, but she had trouble understanding him when he tried to put words together ("connected speech").

My mom took Brody back another day for evaluations with a vision impaired teacher, physical therapist, and school psychologist. Brody never warmed up to the vision impaired teacher. Oh well. The physical therapist won him over by taking him to the playground and working with him. Brody was able to get around safely although she did see his balance issues. Over the last few months, Brody's balance has gotten a lot better. Because of the hearing loss and Usher Syndrome, Brody's vestibular system is all out of whack. This causes him to fall a lot and to do some things slower than other kids his age. He wants to keep up with the other kids and has been pushing himself to keep up. The psychologist looked at Brody from a pragmatics perspective. This is looking at how he interacts with others. Since there weren't any other kids at the evaluation, she went with Brody to see him in his VIPS preschool class. She observed what we reported about how Brody doesn't initiate play with other kids or unfamiliar adults. He also didn't take conversation turns, rather he answered with one word or phrase.

Today, all of these evaluators plus a chairman, Brody's current SLP, one of the preschool teachers for Shelby County, the Shelby County Special Education Director (who was a former deaf and hard of hearing teacher), my mom, Jordan, Brody, and myself all crammed into a little conference room to go over the results. He didn't qualify for Vision Impaired services, which we kind of expected. While he has the genetic testing to prove he has Ushers, it doesn't currently have an impact on his vision that would have an impact on his education. Like I mentioned earlier, Brody was able to do all that the physical therapist asked of him. Again, he didn't qualify for physical therapy, but we did write in the plan for her to keep an eye on him once he starts to see if he needs it once the school year starts. Brody qualified for speech therapy (yay!) but barely. He qualified with a mild speech delay. He's going to receive speech therapy 6 times a month. He'll be pulled out in a little group with other students working on similar speech goals. He also, barely, qualified to receive services from a teacher of the deaf. She will come into his room two times a week to help him work on his socialization and conversation skills. We've met his teacher of the deaf a few times and love her!

We are really happy with how the process went. A lot of people want to know why we decided to not put him at the school I teach at. For one, class size. The maximum number of students in my classroom is 6. You can only be so social with the same 6 students. Brody's weaknesses fall under that socialization piece. The second reason we want Brody at a typical preschool is the fact that he will have hearing peers to model speech and language. In Kentucky, you have to qualify for free, public preschool under having a disability or being below a certain income. I have had some argue with me that he will be in a class with students that aren't going to be good models for him. I have to disagree. Just because they come from poverty or have a disability does not make them a poor language or speech model. Brody learns best through incidental learning (or "picking things up" that he over hears). Being in this type of preschool environment allows him more access to do that.

Here are some other Brody updates since I haven't updated in 3 months. Oops!

Brody has become super obsessed with birthdays lately.  He thinks all birthday parties need birthday hats, balloons, blowers, and a cake. We celebrates Aunt Sara's birthday last night with a cookie cake. This really confused him! He knows all of the words to Happy Birthday. Others can almost understand all of his speech in it too!


Brody has continued his love for books, numbers, and letters. He also knows all of his shapes and how many sides they have. He corrected grandma the other day about what a stop sign was. "No grandma. Octagon. 8 sides."

The car is an awesome time for language. Where we live, we have at least a 25 minute drive to and from pretty much anywhere. Brody reads books, sings, and has conversations about our day. He has recently started "singing" to the radio. He will tell me to "turn it on" aka turn it up if its a song he recognizes. He current favorite is Bruno Mars' "Uptown Funk You Up" which sounds bad when you have a speech delay. We try to discourage it in public. :)

We did our third Walk4Hearing this year! We were about $100 short of our goal of $2000. We will get it next year! Brody had a lot of fun! His cousins Mary and Lily came out to walk with us! 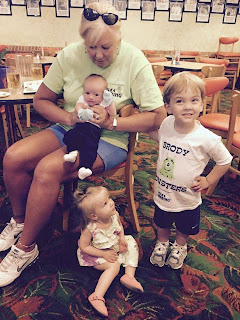 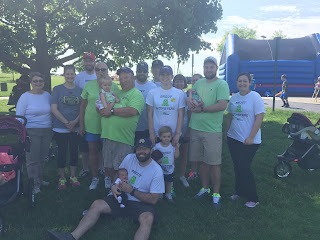 Brody has also become OBSESSED with baseball! We took him to a Louisville Bat's baseball game where he got a baseball form the pitcher. He thought he was the coolest kid there. 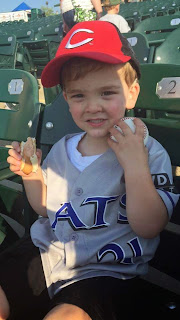 Brody has been drawing people lately too. Maybe he's going to be an artist like his Aunt Sarah Fromholt! 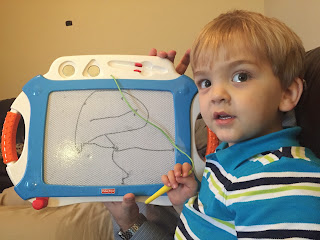 Posted by The Fromholt Family at 6:58 PM No comments: