I've been documenting Brody's "sayings" on Facebook this year. We started off in January with him saying "mama watch Brody." Three words together clear as day. We were ecstatic. Now, he never shuts up! Who would have thought I would need peace and quiet from my deaf child! Here are some other Brody sayings...
"Make happy face" 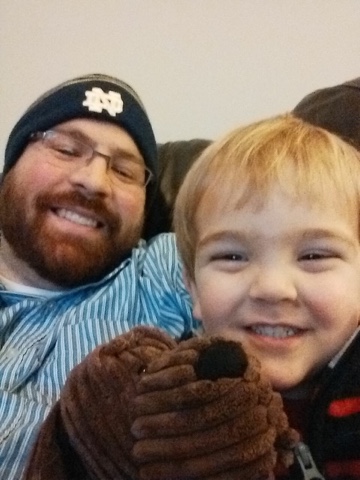 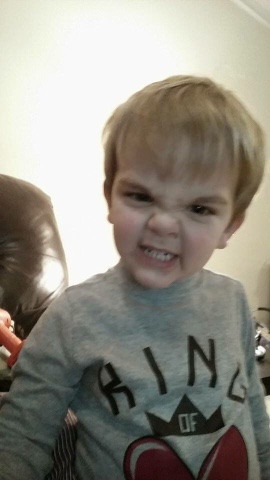 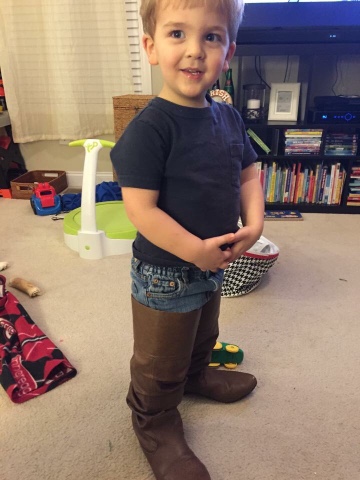 Brody woke up from his nap after I got home from work. His first question, "where is grandma?" His second question, "daddy bring pizza?"
Just starting off the day arguing with the three year old that our last name is Fromholt and not Farm-goat.
Brody's been coming up with some pretty creative reasons not to go to bed (He needs a shower. There's something on his tongue. He forgot to shut the playroom door. Etc.) Tonight he informed us he was a penguin (as he waddled out of his room) and couldn't sleep.
We were watching the Garfield movie where he's at a castle. The castle had a golden dome.
"Hey! I seen a gold dome!"-Brody
"Where?"-me
"Notre Dame have gold dome!"-Brody
Brody's been learning the Pledge at school. Still a work in progress. He argued that it's "Dalmatian under God."
Today's "brody-ism." I always tell him "sometimes life is hard" when he's whining or crying without a good reason. He started crying on the way home today.
Me: "Why are you crying?"
Brody: "Life is hard."
Reasons Brody couldn't help Jordan take the seeds out of the pumpkin:
1. There's too much food in his belly.
2. He got stuck on the couch and couldn't move.
3. He forgot he was supposed to take a bath.
4. It's too yucky.
5. He needed to scratch his belly.
"Hold on a second. I can't pass germs. I need to wash my hands."-Brody's current bedtime excuse.
Brody talking to Jordan on his pretend phone:
"I'm playing and watching tv and playing with cars and umm I'm breathing too."
Me: "I love you to the moon and back!"
Brody: "I love you to the moon, NOT back!"
"Call they tole me, a pumpkin Papa."-Brody
He's almost learned the words to the "Little Drummer Boy."
Brody can't put his pants on because there's too much poop in his belly.
Aunt Sara was a cherry-aider (cheerleader).
Brody said "grandma take off your jacket it doesn't look good."
Incase anyone was wondering..."jammas" aren't clothes. We wear clothes to school. We wear "jammas" when we stay home.
According to brody: It's a bathroom table not counter. Counters are long and tables are short.
Brody got robot pajamas that have an on/off switch on the back. He woke up and got on all fours, looked at Jordan and said, "daddy turn on the robot."
After Jordan told Brody that we were going to stay home all day in our pajamas: He said "I can't wear pajamas tomorrow because when we go to the gas station the man will say 'Hey! You can't wear Ninja Turtle jammies!'
It's been a very progressive year with Brody's expressive language. Three words to a 24 word run on sentence! We'll take it!
Merry Christmas!
Posted by The Fromholt Family at 5:41 PM No comments:

Brody is super excited to be a big brother. Not so much to have a sister. I think she'll grow on him! 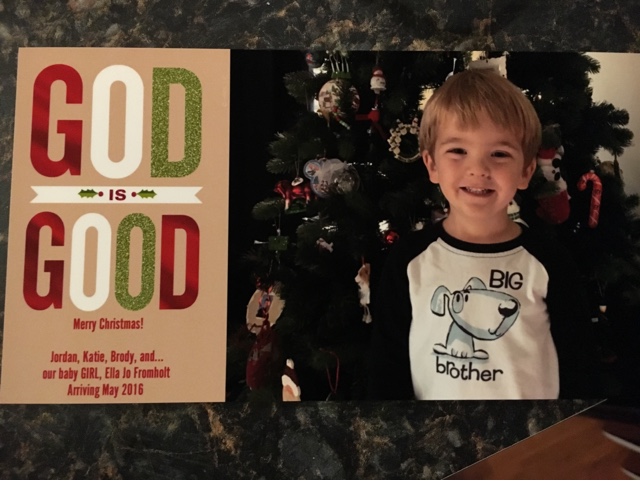 Posted by The Fromholt Family at 2:19 PM No comments:

We have had a busy few months! Brody's language is exploding! We have to tell him to please be quiet so we can have a turn to talk! He is coming up with the funniest things to say that always throw us for a loop!

Brody has been the standing entertainment at JoJo's (my grandmother) nursing home. The women on her wing gather around him to see what he's going to do that day. JoJo is very quiet now days, but when Brody shows up, she shouts out, "HELLO! My great grandson is here!" Brody has been using JoJo's cane as his microphone. He loves to sing songs in it to her and the other women. He also gets into their activities closet and gets out balls and basketball hoops. He has all the women join in! 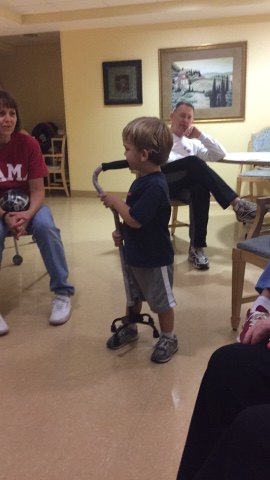 Brody continues to LOVE his preschool. His teacher is awesome and sends me updated pictures. This was during center time. He's at the science center. His Aunt Jodi was happy to see a possible fellow scientist in the future! Brody has made true friends and talks about them every night. One of his IEP goals was to work on socialization skills. We just got his progress report. He's up to 80% mastery in most areas including the socialization. When we are out with friends or at the park, he joins right in like any other kid! So amazing! 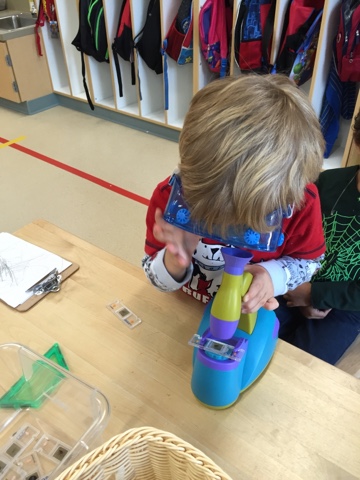 A new favorite past time is building forts in the living room. It's a boys only fort. Bear was allowed but I was told to stay on the couch to watch the movie. :) 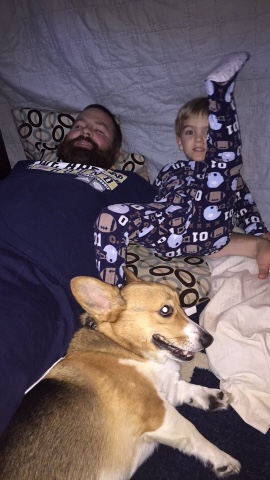 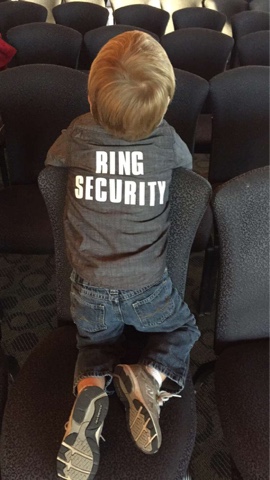 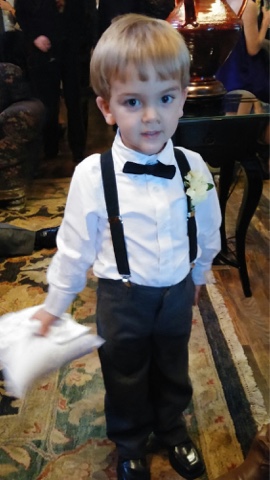 Brody is completely obsessed with my Uncle Edward, or as he calls him Uncle Eggward. He talks about their visit this summer all the time, prays for him every night, and asks questions about him often. In person though, he only stared!
We have been going to Southern Lights at the Kentucky Horse Park for the last few years. We go the Tuesday before Thanksgiving when there is no one else there. It's so nice! They have Christmas lights set up throughout the campsites. Then inside, they have Santa and model trains. Outside, they have a train and petting zoo. 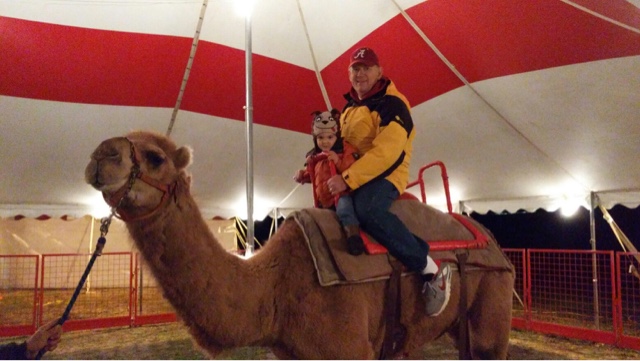 We spent Thanksgiving in Louisville at my parents' house. We brought my grandmother from her nursing home for a few hours. Brody loved having JoJo there! He helped prepare her food and even got her to play his Curious George Zoo game and Bingo! 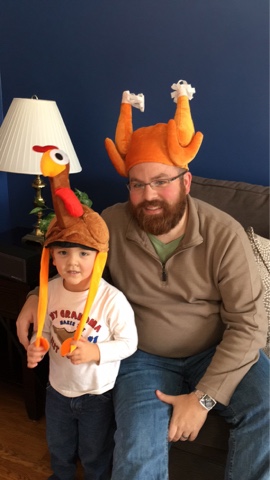 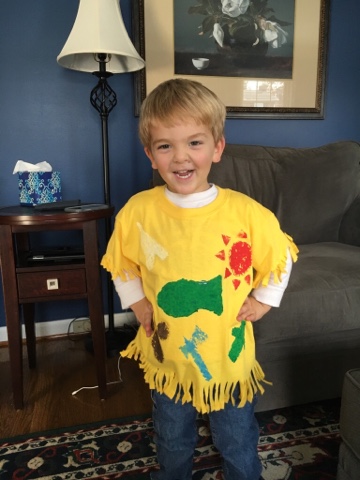 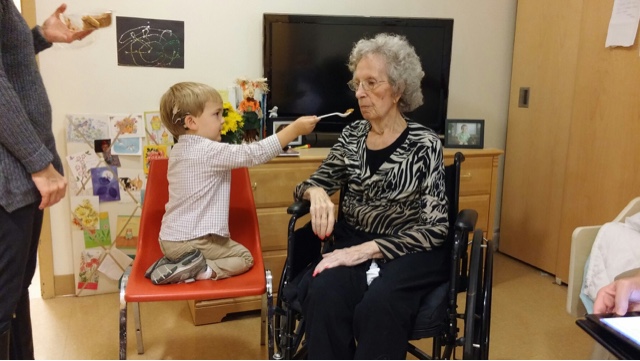 Over Thanksgiving break, we took Brody to his first movie in the movie theater. He did really good until the last 10 minutes or so. He loved the popcorn and icee too! 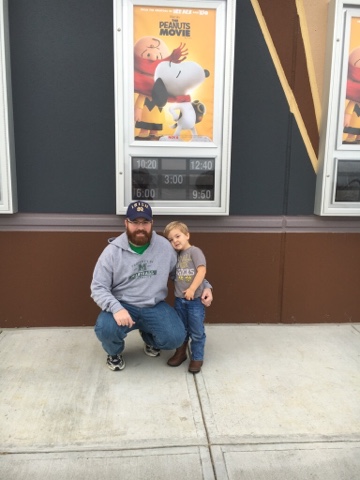 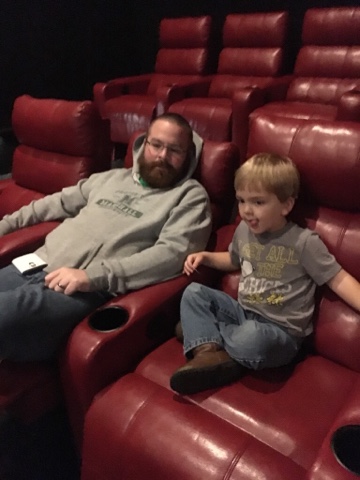 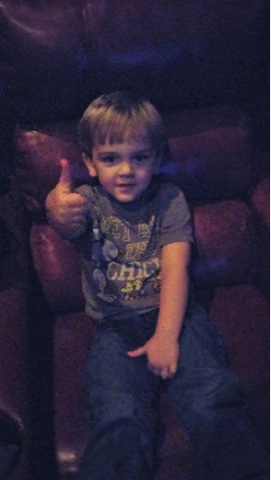 Someone got a RingPop for doing a great job at his dance class. He was pretending to be a baby and making the RingPop his paci, but ended up falling asleep with it. 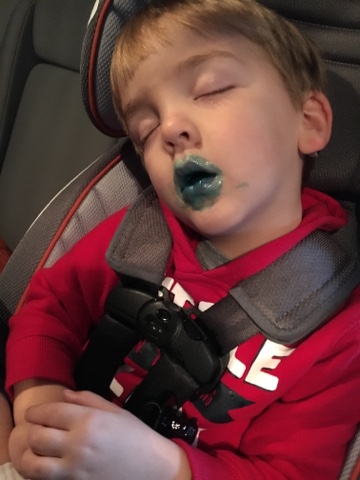 Brody loves the Christmas decorations! He even convinced Jordan to put Christmas lights up outside this year. 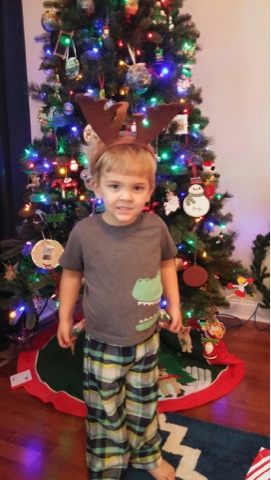 No tears this year with Santa Claus! He loved it. He wants a Mickey Mouse camper, space shoes (He's decided to be an astronaut when he grows up.), and a Snoopy toy. 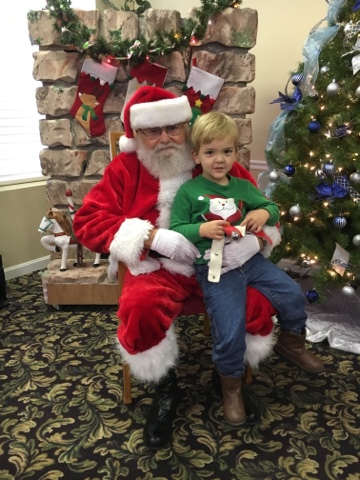 We went to Cincinnati Children's on Friday to see Dr. Mike. Brody's mapping was only slightly changed. We also added the SCAN program to try out. It's really only for adults, but coming for kids. Brody gets to try it out! So far we love it! It will scan the environment Brody is in and then his processors will adjust volume and what not to make his hearing the best in that situation. He hasn't complained about the toilet flushing since Friday. A good thing since he usually screams! We also added the slow to wake program. It slowly turns on the processor when it first is turned on so that the sound gradually gets louder and not all at once. We don't like it though. We have it set up to do 3 minutes. We might try a minute instead. We have trouble when he wants to talk right away and can't hear us! It's been a little frustrating for him and us.

Brody's imaginary play skills are expanding like crazy! He comes up with the coolest scenarios to play.  His cars go to the movies or to get ice cream. The other day his potato heads went to the Science Center. Today he was painting his boat at home. 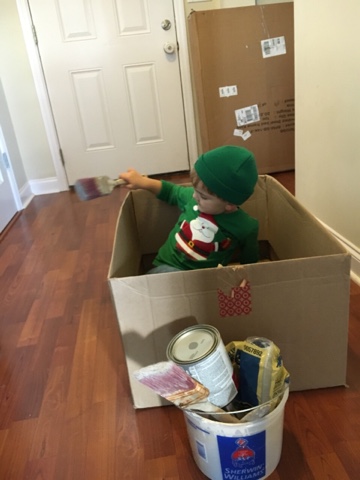 We found out if Brody is having a brother or a sister yesterday...but we sent it out in Christmas cards. So you'll have to stay tuned!
Posted by The Fromholt Family at 11:40 AM No comments: